A reply had been received from Mr. Balfour in reference to the Trades Disputes Commission.  He referred the Council to an answer he had given in the House of Commons on July 2nd to the effect that  it  was not possible to reconstruct the Commission. Since this reply the Commission had been boycotted by the Trade Union leaders, who had all refused to give evidence because of the unrepresentative constitution of the Commission.

It was reported that a donation of £10 had been received (per Mrs C.  Royle Allen) from the Residuary Legatees of the late Daniel Proctor Esq.   to the funds of the Council.  The meeting decided to send a vote of thanks to the Legatees for their kind gift.

The weavers reported that an agitation had arisen in one of Messrs. Howarths weaving shed in regard to joining the Northern Counties Amalgamation.  The two or three weavers who were supposed to be keen about  the matter has been visited by Mrs Dickenson, & a copy of the Rules had been sent into the shed.  The Committee of the Weavers' Union while believing in amalgamation do not think it would wise to apply for membership to the Amalgamation until the District was thoroughly organised & the funds much larger.  It was hoped to settle the matter by proving to the weavers that the present time was  inopportune.

A complaint had been sent to the “Particulars Inspector” about the prices for certain yarns not being posted on the wall in the Doubling Department at  Messrs. Holland’s Mills, Ancoats.  This matter had been put right by the Inspector.  The Gas Workers & General Labourers Union had been organizing the  Winders, Reelers, Doublers &Gassers at Stockport & had got 600 women in  their Union.  The Secretary had been written to asking for information about wages & conditions in Stockport & it was found that they had no uniform price list & that  different prices was paid for the same class of work by different firms.  They hoped when trade revived to get a “Standard List” for the town.

The Folders & Sewers had arranged for one of their members to do some organising for them in her spare time.  She was only partly occupied at her trade.  The visiting of shops which had been done by Mrs. Dickenson had resulted in a slight increase of membership.

The M & S Trades & Labour Council having refused representation to the Federation of Women Workers Mrs. Dickenson had written to Mr. Kelley for an explanation.  He had made an appointment for Thursday, September 3rd.

Miss Bentley introduced the question of wages paid to the women at Mather & Platts.  A bonus system had been introduced which had not resulted in much gain to the workers.  The matter was left over for the Union to deal with. 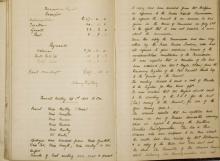 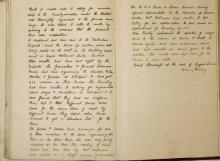