The minutes of the Executive Committee were read, in which reports of the work done during the summer months were given.

The under manager of the Linotype Works had been seen on July 14th in reference to the case of L. Balshaw. Subsequently Mr. Place the works manager was written to, the facts were stated & he was asked to give the matter his consideration. He replied that there was no reduction in the wages on the machine & offering to submit the case to arbitration. The offer was accepted but owing to the holiday season Mr. Place had not arranged a meeting. In the meantime the firm had altered some of the sewing machines & increased its speed. It was resolved that the arbitration should take place at the earliest possible date.

The negotiations with Messrs. Bradshaw & Blacklock had been opened on July 15th by a deputation consisting of the President & Secretary of the Society of Women Engaged in the Bookbinding & Printing Trades & Mrs. Dickenson & Miss Ashwell. Three points were urged

On July 20th Miss Ashwell had received an application for help from a tailoress working at Messrs. Hammonds Clothing Factory, Store St. Ancoats. It appeared that 60 girls were out on strike & had been out for 5 days. A meeting was held at the office 9 Albert Square the same evening which was attended by nearly all the girls. The firm had been bringing out new patterns for the season & had offered various reductions in prices. The dispute had since the commencement of the strike narrowed itself down to the one point of the price of vents in overcoats. The correct price was 1d for 2 vents. The firm offered ½d for 2 vents. This the girls refused, & were told that they must serve a week’s notice before striking. They did not do so. After the strike began the firm conceded ¼ & offered ¾d for 2 vents. The girls declined the offer. By their request Miss Ashwell went to see the heads of the firm. They were determined to make no further concession & said that as the girls had not served a week’s notice they had discharged themselves & could not be taken back unless they asked individually for permission to return. Ultimately Mr. Merritt one of the partners agreed to meet the girls on Monday morning July 23 in two sets (1 sack hands & 2 fancy hands) A further meeting of the girls was held on July 21st at the office. Miss Ashwell after again urging the general agreements in favour of forming a trade union advised them to meet Mr. Merritt on July 23rd & accept 3/4d for 2 vents. Some of the girls did this, but many left the employ of the firm. Subsequently Mrs. Dickenson gave bills at the factory for a meeting to be held at the offices of the W.T.U. Council on September 5th but none of the girls attended.

Mr. Z ??? of the Jewish Machiners, Tailors & Pressers' Union had asked for help in regard to the Jewish Tailoresses Union which was in an unsatisfactory condition, the membership having fallen to 25. A meeting was held on September 12th & Mrs. Dickenson & Miss Ashwell attended & spoke to the girls. One of the workshops had been visited in the dinner hour, and further work on this kind was intended. Great difficulty was experienced in making some of the girls understand as they only understood German & Yiddish. The Union had been asked to provide literature explaining Trade Unionism but had not done so. Mrs. Dickenson & Miss Ashwell were attending the weekly meetings of Tailoresses' Union.

Arising out of the minutes the question of issuing the leaflet of the Women's Trade Union League London on Compensation for Injuries was considered. Mrs. Dickenson read a letter from Miss Maria Wilson Secretary to W.T.U. League, stating that if no material alterations were contemplated in regard to the wording of the leaflet & the name of the League was retained the League would be willing to authorise the use of their leaflet. After some discussion it was resolved that the wording of the leaflet should be left intact, and a note printed in red ink should be added at the bottom of the sheet asking women workers in Manchester to apply to the offices of M. S.& D. Women's Trades Union Council 9 Albert Square. It was decided that 1000 copies of the leaflet should be ordered.

Miss Ashwell then said that Mrs. Schwann had received the resignation of Hon. Mr .& Mrs. Lyttleton on account of their departure from Manchester. Mrs. Arnold moved & Mrs. Sidgwick seconded a cordial vote of thanks to Hon. Mr.& Mrs. Lyttleton for their services to the Council, coupled with regrets.

A financial statement was next made. The bank balance had fallen to £11 & the want of money was urgent as there were many opportunities of work during the winter months. Treasurer Mr. Herford called the attention of the members of the Council to the new leaflet which had been issued & asked them to endeavour to secure new subscriptions of 5/ 10/s or more.

The names of several suggested new members of Council were next brought forward.

Miss Crompton of the University Settlement was proposed by Miss Hertz & seconded by Mrs. Arnold. Carried.

The appointment of Miss Crompton to fill the vacancy created by Mrs. Lyttleton’s resignation from the Executive Committee was confirmed by the Council. The choice of Mr. Dickson was further confirmed.

The Secretary stated that it was proposed to hold a special meeting during the November visit of Mr. Macpherson Gen. Sec. National Union of Shop Assistants when Mr. Macpherson would address the members of the Council on Shop Life & proposed legislation in their interest. The exact date would be announced later on.

Mrs. Sidgwick asked some questions in regard to the workers at Messrs. Nobles’. Mrs. Dickenson replied that a strike against reductions had recently taken place, but the girls having no union had been obliged to give in. They regretted not having joined a union in November 1897 when the Women's Trades Union Council had taken steps to organise them. It was hoped that a meeting would be held to which they would be invited. 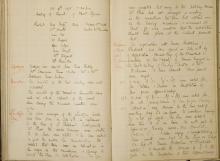 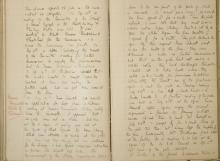