The minutes were read and passed. On Miss Cox’s recommendation a linoleum for the office  had been bought by Miss Gore Booth for £2.10. Mr Herford moved, Miss Simpson  seconded,  that the purchase be approved. Passed.

Miss Ashton moved that Miss Bulley attend the conference for Higher Education  of Working Men. Seconded by Mrs Cooke. After some discussion the proposal was withdrawn.

Miss Bulley bought some correspondence before the Council, a copy of an extract  from old letter of Miss Gore Booth had been obtained from the Home Office by Mr. Shackleton. Miss Bulley had also written to Mr Shackleton  and to the Home Secretary. Miss Gore Booth explained that the letter referred to was sent by the Women’s Trade  Unions to the Home Secretary, that it was the result of a difficulty among the Trade Unions. Miss Bulley was prepared to go further with the matter. Mr Herford proposed, Miss Crompton seconded,  that the subject be dropped. Carried. The Secretaries then went away.

A vote of thanks to Miss Crompton & Mr Marr for the use of the settlement for the meeting of the machinists.

Letters were  received from the Secretaries of the Unions of Shirtmakers, Powerloom Weavers, Patent Cop-Winders, Bookbinders, Tailoresses, Clay Pipe-Finishers, Women’s  Federation, stating their desire to withdraw  from representation on  the Council on the ground that the unions wished to take independent action on trade matters.

Letters were read from the  the Organising  Secretaries  placing their resignations in the hands of the Council. Mr Johnston moved, Miss Ashton seconded, that the resignations be accepted. This  was agreed nem con.

Mr Johnston moved, Miss Crompton seconded, that the Council advertise for one Secretary to devote her whole time to the work. This  was carried.

Mr Johnston moved, Miss Ashton seconded, that the salary  offered be £100 a year. This was carried.

Miss Bulley, Miss Cox and Miss Crompton were asked to undertake the adverts and to go through the applications.

Mr Harker proposed, Miss Cox seconded, that the unions be asked to send  representatives to meet the Council on Thursday evening, Oct 6, at 8 o’clock. This was carried. Miss Bulley and Miss Cox were asked to undertake the letters to the unions.

Mr Johnston proposed, Miss Ashton seconded, that the City Council be requested to  at the next election to co-opt Miss Bulley  as representative of the WTUC on the Educational Committee.

signed by A Amy Bulley

Miss Bulley brought  some correspondence before the Council. It appeared that in Feb 1903  Mr Shackleton, MP, was asked by the  persons representing themselves to be the Manchester Women’s Trades Union Council to introduce a deputation to the Home Secretary  on labour laws.The Home Secretary (Mr A Akers-Douglas) found that the object was to complain   of the men’s unions and to advocate women’s  suffrage, and stated that  that one of the signatories was Miss Gore Booth, Organising Secretary of the Manchester WTUC. Mr Shackleton and  the Home Secretary both declined to go further in the matter. Miss Bulley had informed the Home Secretary  that the Council had never  asked for an interview,  or even discussed the subject indicated. Miss Gore Booth admited having signed the application as Organising Secretary  of this Council and expressed her regret. Miss Bulley enquired whether the subject should be pursued further, but it was decided to drop it.

Signed by A Amy Bulley

In view of the  the Resolution thrown out  at the last Council meeting (“that it is now time that the Council should bring their policy into line with the policy of the Unions with which they are connected, by taking active part  in the effort to gain political power for the women  workers”) and after my strong protest at the time, I am  sure you will understand that I find myself reluctantly obliged to give up my work for the Council.  The Council has finally decided to adopt a course, which, in my opinion,  cuts them off from all the broader, more progressive  & more hopeful  side of the modern labour movement,  & separates their policy from the policy of the organised women themselves  whose interests & opinions seem to me all important.  It is a profound conviction  of the absolute importance of political power to the workers, especially the women workers, that forces me to take this step. I have therefore put my resignation on the Agenda for the next meeting & hope you will  be kind enough to read this letter to the Council

Since the last Council meeting  I have  been thinking a good deal about the attitude of the Council in regards to working women & the franchise. As a Trade Unionist I should  always wish to identify myself with the women in any effort they might make  to improve their position, politically and industrially, & I  have come to the conclusion  that it would be best  for me to sever my  connection with the Council, seeing that they are not prepared to fall into line with the Women’s Unions. 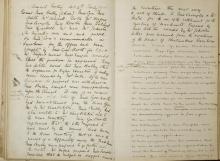 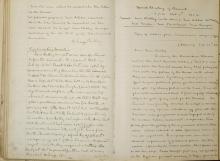