Correspondence.  An application was received from the Socialist Choir, for use of office one night per week for their choir practice if found suitable for the purpose.  The Secretary said she had offered them the room for a trial practice.  Miss Ashton moved & Mr. Marr seconded  that use of room be granted for 2/-per meeting.

Resignation Miss Simpson.  Miss Margaret Simpson wrote resigning her membership of Council.”My interest in work of the Council is very real but my health makes it a matter of necessity for me to cut down the work with which I am connected.” The Secretary was instructed to write & express the Council’s regret.

Resignation Mrs. Hadden.  A letter was also read from Mrs. Hadden saying that pressure of home duties made it impossible for her to assist  longer in the Council’s work.  The Secretary was asked to see Mrs. Hadden & ask her to reconsider her decision.

Vote thanks to Miss. Littlewood.  The Secretary was as to convey to Miss Littlewood a message of thanks moved Mr. Herford sec.  Mrs. Cooke for her kindness in coming daily to the office during the month of August.

Finance.  The Treasurer then reported on finance & urged that renewed efforts should be made to secure additional financial assistance.

Trades Union Grants.  It was reported that 8 new grants from local Trades Union organisations had been received since the last Council meeting in response to the appeal for funds.

Evening meetings.  The advisability of holding the Council meetings in the evening instead of afternoon was next considered.  It was urged that the Secretaries of the Womens Organisations, connected with the Council, could not attend in the afternoon & this made represensation impossible.  After some discussion it was resolved that the question be deferred until next meeting & that the Secretary be asked to write to all members of the Council & discover to what extent the evening would  be preferable to afternoon for Council meeting.

Unemployed committee.  A request from Unemployed Committee, was next dealt with, that the Council should be represented on the Ccommittee & take part in its work.  Rev.  J.  J.  James moved & Miss Gaskell seconded that Mrs. Ashwell Cooke & Mrs. O.  M.  Aldridge be the Council’s delegates also that a Secretary of one of the Womens Unions be appointed.

Dismissal at Moseley’s.  The dismissal of two members of the Leather Workers Union from  Moseley’s was then discussed.  The plea  for dismissal was slackness of trade, this however was  only part of the reason.  The Secretary had seen the manager & found, from his admission that the girls had been chosen on account of their action last Easter in resisting a second reduction of prices for stitching Gladstone bags & also for their active interest in their union which had been formed since that event.  In spite of their long service of 5 ½ & 6 years the manager had dismissed them whilst retaining services of other girls who had been but a few months in their employ.  The suggestion had been made to the manager that he should keep all the girls on & let them share equally loss of time.  He couldn’t see his way to do this but had promised to send for the girls when fresh orders came in.  The case of the girls was a hard one as owing to  general slackness there was very little chance of employment for them & although they had paid in to their Union from the beginning they were not entitled to benefit until 5 weeks time.  The matter had been before the Organisation sub-Committee & fully discussed & on the recommendation of Miss Bulley who had specially attended the meeting a grant of 6/-a week each to the girls had been made until such time as they obtained employment or were entitled to assistance from their Union funds.  On the motion of Miss Cox seconded by Mrs. Ashwell Cooke the action of the sub-Committee was endorsed by the Council. 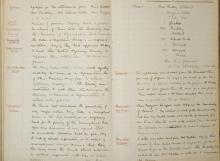 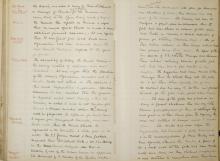 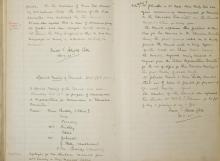