The minutes of the last meeting were read and passed.  Apologies were read from Mr. Schwann,  Miss Ashwell, Mr. Herford,  Miss Ashton,  Mr. Kelly,  Mr. Dickson,  Mr. Redford.  A report was given on the state  of the Tailoresses’ Society.  The membership was decreasing considerably among the girls at the Cooperative Tailoring Factory at Lower Broughton.  This was thought to be due to the action of the manager.  He had treated the girls who belong to the union very unfairly making trivial excuses to get rid of them, and giving the best positions to the non-union girls.  Before taking action the Council decided to collect some definite information from girls who had been discharged without any adequate reason.  The Secretaries were instructed to get together some of the aggrieved girls to attend at the office on Monday night and meet members of the Council.  A deputation was formed to wait on the directors of the Co-operative Society.  The deputation to consist of Miss Bulley,  Mr. Johnstone and the Secretaries.

Mr. Johnstone’s proposal as to the advisability of more frequent Council meetings was discussed.  It was decided to let the matter stand over till the end of the year when it could be settled at the Annual Meeting.

Mrs. Dickenson reported about the Federation meeting on October 30th.  There had been a good attendance of working women. Speeches had been made by Miss Wilson,  Miss Isabella Ford,  Mr. Hamilton,  Miss Bulley and Mrs. Dickenson. Miss Forsyth was in the chair.

The Cap Makers had asked the Council for help in organising the women in the trade.  A meeting was being arranged for a fortnight hence and the Secretaries had promised to attend and  to speak.  Efforts were being made to increase the membership of the Fancy Box makers and the women shop assistants.  The employers in the Fancy Box making trade had formed themselves into a federation and were making rules and regulations that were a danger to the position of the women workers.  The Secretaries had visited several small shops, and a meeting had been arranged for that evening.  The question was discussed as to whether the  Council should allow themselves to be represented on the United Workers Municipal Election Committee.  One of their meetings had been attended by Mrs. Dickenson.  The Committee is formed for the most part of representatives of Trade Unions,  and  the object is that the interests of Unionists should be represented on the City Council.  The matter was deferred for the decision of the next Executive Meeting.

The Council considered and passed the following Resolution of the Committee. " That the salaries of the two Secretaries should be equal, as long as their positions were equal.  The salaries to be provisionally £70 till the financial position of the  Society should allow  of their being raised. " Moved by Miss Wilson seconded by Mr. Johnston.  Miss Cox proposed Miss Spencer seconded, Mrs. Alfred Haworth should be asked to join the  Council. 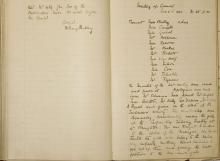 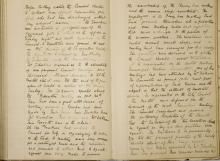 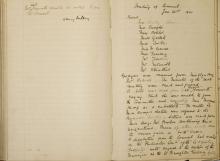