A letter was read from Professor Sidney Chapman expressing sympathy with the Council’s work.  As he had only just come to Manchester he wished to have a little time to look around before deciding to connect himself officially with the Council.

Mr. Herford then gave a financial statement up to the end of October 1901 which was as follows:-

Mr. Herford reported that the overdraft (£50) at the bank had been arranged.

The question of general organisation was discussed & the following resolutions passed.

That a  Committee of three members of the Council be appointed to assist in the work of organisation. Moved by Miss Ashton, seconded by Miss Gaskell.

That Miss Cox & Mrs. Weiss be asked to be on the Committee to start the work & be empowered to add the third member.  Moved by Miss Wilson & seconded by Mrs. Hobhouse.

It was reported that the Cap Makers had been having weekly meetings at St. Saviours schools, Park Street, Cheetham.  The membership had not increased & it had been suggested that they should meet at the office as to be in touch with the other women trade unionists.  A meeting was to be held on Wednesday, November 13th, when they proposed to discuss  the advisability of becoming a branch of the Federation of Women Workers.

Miss Kay,  Secretary of the Tailoresses' Union, had had an interview with the  Cooperative directors re the reduction of prices.  The directors maintained that the reduction would not affect their weekly earnings because  work would be given out in larger quantities & there would be less waiting.  The Cooperative Wholesale would be able to get larger orders at the reduced rate.  After some discussion it was arranged that Miss Kay should be allowed to examine the wage books of the girls at the end of a year & see whether the tailoresses had lost or gained by the new arrangement.  The interview took place on October 3rd 1901.

The question of the folders & sewers doing other branches of bookbinding had fallen through.  The men’s society dealing with the matter  apart from the women.

Eleven women working at Mather & Platts Iron Works had joined the Federation.  They were dissatisfied with their wages & wished the union to try & get them an advance.  Eight were getting 10/-  per week & three 8/-per week.  The work they did was Painting, Insulating Magnetic Coils & Bushes,  ?  Work-Rings etc.  The Council decided that Miss Bulley should  write privately to Mr. Mather about the matter. 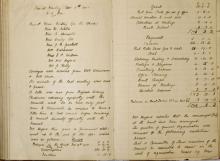 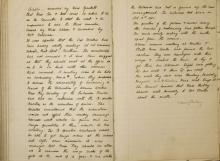