It was reported that the Fancy Box makers had definitely decided to hand over £6.  13.  4 to the Women's Trade Union Council.  The donation was accepted with thanks.

It was reported that the 12 months was over for which the Tailoresses  Special Organiser was employed.  The question of renewal was discussed.  The  Committee expressed their appreciation of Miss Kay hard work & enthusiasm, but at the same time decided that for financial reasons it was impossible to renew the appointment for the present.

It was reported that the  Bookbinders were having a conference to discuss the position  of female labour with a view to an effort being made by  their  society to employ an organiser.  The matter was discussed.

Miss Cox moved “That Council urge the Folders & Sewers not to alter the constitution of their society without further consultation with the  W.  T.  U.  C.” Seconded by Mr. Herford & carried.

Miss Gore Booth reported that she had been put on the following sub-Committees of the Education Committee:  Training of Teachers, Higher Grade Schools & Evening schools,  Elementary education,  Industrial schools.

The question of Technical Scholarships for girls was discussed and the following resolution passed.  That the M.  S. & District W.  T.  U. Council  protest against the injustice done to girls by excluding them from scholarships at the Municipal School of Technology which must result in placing them at an industrial disadvantage.  Moved by Miss Bulley & seconded by Miss Crompton. 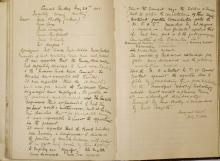