The question of having a social for the workers was discussed.  It was decided that the workers should be consulted as to the advisability of holding one at the present.  The matter was finally put in the hands of the sub-Committee for final arrangements.

The difficulty at Holland's Mill (Winders) was discussed, Sir William Holland had been written to, and an answer had been received from him,  putting the firm’s side of the case, almost exactly as it had been heard from the manager.  An increase of speed owing to new machinery  was supposed to make up to the worker for the 5% deduction complained of, & much was made of the bad state of trade & the low rate of winders wages in other mills.  It was decided in answer to give further particulars re Stockport rates, & to represent to Sir W.  Holland that the workers considered the speed had not helped them, because the yarns broke frequently & they could not keep the ends up.

It was reported that the Hanley Trades Council had asked Miss Gore Booth to speak at the Labour Day Demonstration at Hanley with a view to forming a union among the women, who seemed to be enthusiastic but to require assistance in starting.  Mr. Johnstone moved, Miss Cox seconded, that Miss Gore Booth should be empowered to assist them.

The financial statement was read as follows 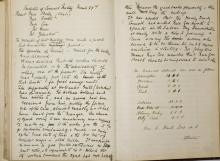