The minutes  were read and passed.

A Circular had been received from the Tariff Commission  asking for information & statistics.  Miss Ashton proposed & Mr. Marr seconded that it should lie on the table.  Passed.

It was reported that a difficulty had arisen in Holland’s Mills, Ancoats.  A meeting for Winders had been held at Jersey   Street dwellings.  The chief grievance was a deduction of 5% from wages already very low.  Much dissatisfaction was felt at this, which was the survival of a deduction that had been made by the firm 25 years ago, on the plea of a special and temporary need.  The Secretaries had seen the manager at Holland's, and negotiations were still going on.

The Weavers'Annual Report was read out & it was requested that at their 2nd Annual meeting (this week) the appointment of a Secretary was going to be discussed.  The Weavers' Union had been getting  out a leaflet which had been adapted for them by the Secretaries from a very popular Fabian tract.

It was reported that the Chainmakers' Union at Cradley Heath had held another meeting, which was attended by Miss Gore Booth.  200 new members had joined, the membership now being 400.

A meeting was being arranged for the electric workers in Trafford Park, but it was difficult to get a room.

The financial statement was given.  It was reported that no new subscriptions had been received as a result of the Annual meeting except the 6/6 given at the meeting.

Financial statement was given

The sub-Committee  was reappointed for the year.  Miss Cox, Miss Pankhurst & Mrs. Cooke, Mr. Johnston were re-elected with power to add to this number. 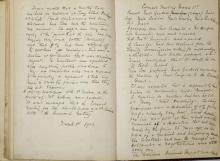 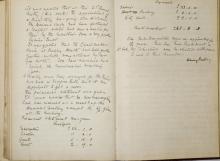