An apology was received from Miss Gaskell.

The Minutes were read and passed.

Circulars were read from the Chamber of Commerce (re scheme for Decimal weights & coinage), from the Education League re Education Bill, and from the London Women’s Trade Union League re Factory Bill for 1901.  The Secretaries were instructed to acknowledge the two former circulars. A sub-Committee consisting of Miss Bulley, Mrs. Ashwell Cooke, and the Secretaries was formed to discuss the Factory Bill.

Professor Flux’s resignation (on his leaving Manchester) was accepted with regret by the Council.

It was reported that an interview had taken place on May 9th between the manager of the Linotype works and the Secretaries re prices.  It was agreed that the price should be fixed so as to enable the girls to earn from 16s to 18s a week.  The Federation Committee had expressed themselves satisfied with the result, but it was felt necessary to keep a strict watch on the amounts earned.

The state of affairs at the Coop Tailoring Department had been discussed.  Further meetings had been held over until after Whit week but one had been arranged for June 10th.  It was arranged that Mrs. Schwann & Miss Gore-Booth should see the manager and try to come to a better understanding about the position of the union.

A meeting had been held in connection with the Health visitors in Hulme, at which the attendance had been poor.  The Cap makers were to meet at the office on June 5th to elect officers and arrange benefits etc.  A Jewish tailoress had applied at the office for help in a case of ill treatment received from her employer.  Help had been given and the man had been slightly fined at the police court.  There had been talk of a further summons from the employer but it had fallen through.

Re the cotton trade enquiry it was reported that letters had been received from Mr. Mawdsley (Secretary of the Spinners Union)

Mr. Wilkinson (Secretary of the Amalgamated Association of Weavers)

from which it appears that there is no branch (female) of the Weavers' Association in Manchester - that there are no women in the Spinners Union.  Mr. Mullin’s letter was not quite clear and he had been written to again, but no answer has as yet been received. 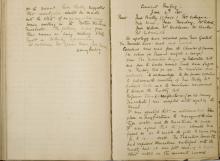 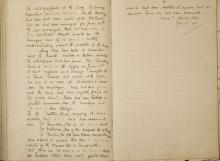