Heaton Park Demonstration.  The Secretary reported she had attended the “Labour Demonstration” in Heaton Park on July 2nd  & had moved the Second Resolution from no.  3 Platform which dealt with the “Trades Dispute  Bill”.

The Treasurer then gave a report of finances of the Council.  After some discussion it was resolved that all unions in the district which had previously contributed should be asked to renew their grants for the current year.  Miss Ashton then moved “That the sum of £50 be transferred from the Emergency fund to the General Account the sanction of Executors of Donor having been obtained.” Mr. Herford seconded.  This was carried.

Renewal of  Secretary’s Appointment.  The renewal of Secretary’s appointment was then taken.  Miss Ashton moved & Mr. Marr seconded “That this Council recognizes the excellent work that Mrs. Aldridge has done, feels every confidence in her abilities & begs her to  accept reappointment as Secretary to the Council at a salary of £100 a year with a minimum of six weeks holiday in the year & subject to the customary month’s notice on either side.” Mrs. Aldridge accepted. 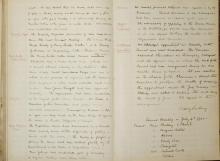 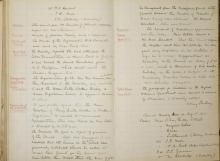