Memorandum The question of the appointment of Sub-Committees was considered and after considerable disussion it was
Resolved That the following be appointed a Special Committee to draw up a scheme setting forth the objects, rules, etc. of the Council.
Mrs. W. J.Arnold, Mr. Hodge, Mrs. Schwann, Mr. Horsman, Mr. Forrest, Mr. J. D. Kelley, Miss. A. Cooke, The Honorable Mrs. Lyttleton, Mr. Entwistle, Mr. Mosses, Mr. Flynn, Mr. C. P.Scott
And that Mrs. Arnold be appointed the convenor.
Resolved That the appointment of an Organising Secretary be referred to the Sub-Committee to select and recommend a candidate to the Council for election.
C.P. Scott

Resolved That the following recommendations be made to the Council;-
1.) That for the present only one paid officer be employed and that she be called the Organising Secretary.
2.) That a communication be sent to the various Trades Union organisations apprising them of the vacancy existing for the Organizer of this Council.
3.) That the official salary to be paid shall be £90.
4.) That an office be taken in some suitable district of Manchester, at a rent not exceeding £20.00.
5.) That the same be furnished with due regard to economy. 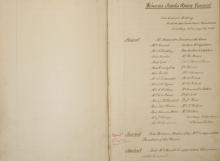 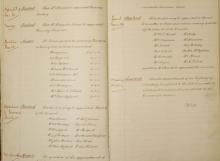