Winders Fund.  The Secretary replied that the £20 had been paid to the Winders' Union & an official acknowledgement had been received by Mr. Herford.

On the motion of Mr. Marr& Miss Gaskell agreed to grant  use of office on days mentioned at rental of 10/-per month or £5.5 per annum.

Model Factory Bill. A circular from the Women’s Trade Union League was read inviting the Council to suggest amendments to the 1901 Factory Act with a view to their incorporation in the Model Factory Bill shortly to be reintroduced in Parliament by Mr. H.  J.  Tennant. Agreed that copies of the Model Bill be sent to each member of the Council.

Shaftesbury Trust Lecture. The advisability of arranging for an illustrated lecture on “Ideal Conditions of Labour” by Mr. Budgett Meakin of the Shaftesbury Lecturer Trust was then discussed.  Mr. J.J. Mallon & Mrs. Cooke seconded that efforts be made to arrange such a meeting at an early date.

Annual Meeting.  Reported that Annual meeting had been held in Lord Mayor’s Parlour on February 7th. 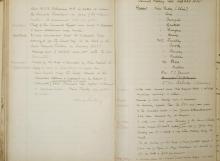 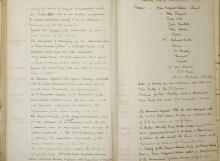