A report of the organisation work done since the that last meeting of the Council was then given.

A meeting for the women engaged in the printing trades had been held on November 18th in Major St. schoolrooms St. Philip’s - at which Hon. Mrs. Lyttleton, Mrs. Schwann, Mr. Hamilton & the Secretaries spoke. There was an attendance of 50 women. The result was an increase of membership to the union from 105 -120.

The financial report for the first six months of the Union’s existence showed £20-1-6 to be the income. The following subs had been paid out

A meeting for the Umbrella Coverers had been held on October 22. It was badly attended, & no increase of membership had resulted. As there were only 7 paying members it was impossible to maintain the Union’s separate existence, the members had therefore been transferred to the Federation of Women Workers. An attempt made on November 23rd to get a dinner hour meeting at the Night Refuge Goulden St. had not altered the position. The trades showed great difficulties from the point of view of organisation. Girls employed on English umbrellas were fairly well paid 10/- 12/ - 16/- per week, while those doing foreign goods & also the out workers 5/-10s per week were it seemed too poor to make the regular payments required by a trade union. There was no unity of feeling among the women. It was not intended to give up efforts in the trade,but to hold together such members of the union as remained by taking them over to the Federation.

Among the Shirt-Makers two meetings had been held. The round of dinner hour visits paid in July to shirts workrooms which had at the time brought 40 fresh members to the union had been followed by the falling away of those new members. Thirty of the girls worked for the Pritchard St. Manufacturing Co. Pritchard St. Charles St. C. on. M. A dinner hour meeting was therefore held on November 24 at Pritchard St. at which Mrs. Schwann & the secretaries spoke. The result was that 5 women were going on with their membership. The work room was typical of many in the trade which from the trade union point of view were unsatisfactory, although not the worst of their kind. The girls earned wages varying from 5s-12s-15s. They had to pay about

7d per week for cotton

Besides this there were raffles. The custom when a shirt was spoilt by an inexperienced worker was to have it raffled for by all in the same work room to lessen the expense to the girl in question. This as many inexperienced workers were employed was not at all an infrequent occurrence. On December 3 a meeting had been held in the lecture room of Union Chapel Schools Clowes St. Gorton. Fifteen women were present only 5 of whom were not members of the union, at present no increase had resulted to the Shirt-Makers Union.

Progress was being made for the investigation for the Fair List of Laundries.

Mrs. Schwann proposed & Mr. Entwistle seconded that the following be asked to become members of the Council.

It was suggested further that Rev. Hoskyns should be approached with a view to joining the Council. Rev. F. Dormer Pierce promised to do this. Mrs. Schwann then said that Mrs. Dickenson had tendered her resignation of her post as organising Secretary to the Council.

It had been considered by the Executive Committee & the following motion had been passed by them:-“that Mrs. Dickenson ‘s resignation be accepted, but that she be asked to continue her services until such time as the Council shall appoint a successor, & that no steps to appoint one be taken until after the next Council meeting on December 8.” Mrs. Schwann then read the letters she had received from Mrs. Dickenson on the matter.

Miss Dodd and Miss Cox spoke pointing out that as the work done by Mrs Dickenson was of a special character it was not in any sense an unfair competition that was involved. Her post would be excessively difficult to fill, & it could not be said that she was depriving anyone else of employment since there were at present no competition for such work

“that Mrs. Dickenson be requested to withdraw her resignation, as the Council value her services very highly & wish to retain them.”

Mr. J. J. Dickson spoke in support of the motion.

(Note - the following italicised section is crossed though in the minutes and replaced with “Rev. T.Green, Mr. Hamilton, Miss Bulley, Miss Reddish spoke in support.” )

Rev. T. Green Gorton said that although he disapproved of competition in the labour market between married & unmarried women he considered that this principle did not apply to the retention of Mrs. Dickenson’s services which was an exceptional case.

Mr. Hamilton (Bookbinders Society & representative of the Folders &Sewers Union) urged that Mrs. Dickenson’s services had been invaluable to the Union of Folders &Sewers & that its successes was entirely due to her work.

Miss Bulley spoke pointing out that the question of unfair competition was involved.

Miss Reddish (Women’s Cooperative Guild) remarked that such a general principle as that married women ought not to work was quite impossible of application & that it would be scarcely just to enforce it in this instance. She referred to the Cotton Trade, where married women were strong supporters of the union.

The motion was put to the meeting 14 in favour 0 against. Carried unanimously. (One member having withdrawn to keep a prior appointment)

It was decided that the next Council meeting should be held on February 9th in the evening & that the Executive should meet before the Council. It was considered that the plan adopted last year of passing the report & balance sheet & selecting officers at a meeting held just before the annual meeting of subscribers was unsatisfactory.

In the absence of Mrs. Dickenson(from illness) a wedding present subscribed for by the members of the Council could not be given on that occasion. It was resolved that Mrs. Lyttleton be requested to write a letter to Mrs. Dickenson & to send her the present, a sewing machine. 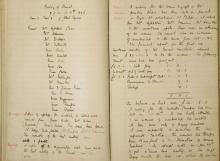 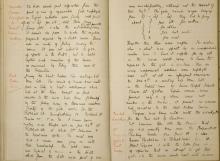 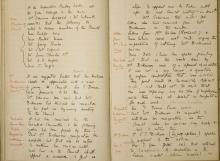 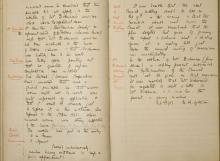