Apologies. An apology for absence was read from Mrs. Eddie.

Painters’ Advances. The Sub-Committee minutes were read and reported “that no advances had been made to the Women Painters through the strike as sufficient details regarding their wages were not to hand.” Reported “ that a meeting had been held in the Caxton Hall to discuss the future amalgamation of the Painters with the Engravers to Calico Printers Union.”

The chairman and Miss Ashton reported conversations which had taken place between themselves and the officials of the National Federation of Women Workers in regard to a proposed Manchester branch of their union. After considerable discussion, Mr. Herford proposed and Mr. Dale seconded the following resolution:-“that the Council invite the National Federation of Women Workers to lay before it a detailed scheme for consideration at its next meeting prior to receiving the proposed deputation.” This was carried.

Leaflet for Unions. The question of a general Trade Union leaflet appealing to women was discussed and the members present decided that one should be drawn up. 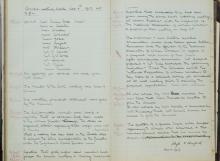