The Minutes of the previous meeting were read and passed.

In the absence of Mr. Herford, the financial report was given by the Secretary. She reported that the annual appeal had gone out to the various Unions and Co-operative Societies and Guilds.

The question of attendance at Council meeting was discussed, and it was agreed that a letter be sent to the Unions asking them to make a special effort to attend the evening meetings.

A letter was read from Miss Lees of Oldham, fixing a drawing room meeting for December 14th and it was agreed that Miss Emily Cox and Miss Quaile be the speakers. Miss Cox reported that Miss Lees had sent a special donation of £8.00 to the funds of the Council.

A report as to the interview with Messrs. Dewsnap of Sheffield was given by the Secretary.

Mrs. Withington and Miss Quaile were appointed as delegates to the conference on the price of food and coal, to be held on Saturday, September 16th.

Miss Gardner and Miss Holden were appointed as delegates to the Co-operative Conference to be held on Saturday September 23 at Holyoake House.

The Secretary reported that the Women’s War Interests Committee had invited the Council to take part in a campaign urging that the Trades Board Act should be applied to all workers in the sewing machine trade. It was moved by Mrs. Withington, seconded Miss Holden and agreed that the Council take part in the campaign.

The sub-Committee minutes were read. The Secretaries had taken part in a fortnight’s special campaign among sewing machinists, along with the Clothiers’ Union. Many shops had been visited and meetings held. A week’s special work had also been done amongst clerks.

It was reported that Miss Quaile, along with Mrs. Robinson and representatives of the Men’s Unions, had attended the Arbitration Case in regard to Evans’. The demand was that the women should receive £1 per week on the working hours governing the joiners’ shops in the district. 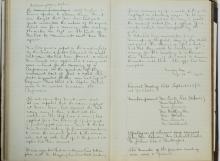 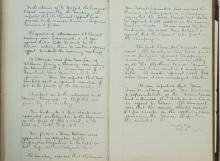