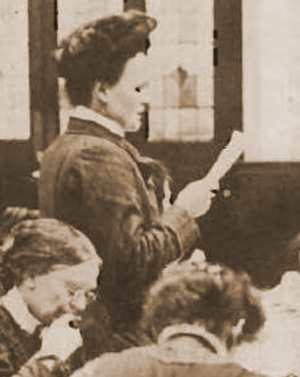 She was born in Montrose on 8 June 1874. She trained as a teacher.  By the early 1900s she  was an active  member of the ILP and Secretary of the Dundee branch of  the WSPU. In 1907  she moved to Manchester where she worked as a WSPU organiser for a time. In February 1908 she took part, with other WSPU members, in an attempt to force their way in to the House of Commons hidden in a furniture van. She served 6 weeks in prison.

Returning to Manchester she and other WSPU organisers worked flat out to encourage women  to go to London for a huge procession on 21 June. At 11 am  on 6 June  Annot Robinson, Mabel Capper and Dora Marsden mounted the steps of Queen Victoria’s statue in Piccadilly and displayed alarge card bearing the WSPU motto decorated with iriss lillies and beside it a placard announcing the meeting the following evening. A crowd gatered and several policemen arrived  who ordered the removal of the placards. Votes for Women reported what happened next:

“Annot Robinson slowly plucked the flowers one by one from the card and laid them on the pedestal.  By this time their main object had been achieved, for the press men and photographers were on the spot, with the result that the evening papers and the Sunday chronicle gave considerable space to the scene.”

On 7 July  a protest  at John Bright’s statue in Albert Square. Mary Gawthorpe opened the proceedings and was followed by Mrs Chatterton, Mrs Wiseman and Annot Robinson,  who was arrested after  refusing to stop speaking. “the tremendous booing of the crowd at this point spoke for itself” reported Votes for Women.   Annot wrote from prison:

Protest meetings were held in Stevenson Square and Marshall’s Croft. Annot was released after her fine was paid by a friend.

In 1910 Annot  became a part-time organiser for the Women’s Labour League (WLL) and that year put forward a conference resolution condemning the Labour Party leadership for its lack of support for the women’s franchise or the WLL. She also supported liberalised and equal divorce. The following year she publicly disagreed with the League’s position on suffrage and soon afterwards moved to the National Union of Women’s Suffrage Societies (NUWSS) as a full-time organiser and was active at the Midlothian by-election in September 1912. She worked for a time in Blackburn with Ellen Wilkinson as her assistant.

When war came in august 1914  Annot was active in relief committees in Manchester, and also served on the Manchester Women’s  War InterestCommittee.  As  a pacifist, she resigned from the NUWSS  - which  supported the war -   and  was a signatory to the “Christmas Letter “ an open letter to German women from British  women. In 1915 she helped to found the Women’s International League for Peace & Freedom (WILPF). In 1917 she was active in  the Women’s Peace Crusade.

After the war she was employed as an organiser by the WILPF and travelled in Britain, USA and Holland on its behalf. In October she visited Ireland as part of 10 woman  delegation from Manchester branch of WIl to investigate burnings and murder by British forces. They held a meeting in the Free Trade Hall on their return on 18th October. In December she and Ellen Wilkinson who had also been on the delegation travelled to the United States to give evidence to an American Commission.

By 1922 there was no  loner any money to employ her full-time and Annot  had to return to teaching in Scotland. She died suddenly during an operation in Perth Royal Infirmary on 29th September 1925  Her friend Ellen Wilkinson, described her in the Labour Leader  as “a big woman and a big personality”  and with “an exquisite sense of the ridiculous and a sharp tongue.”

Entry by Leah Leneman in the Oxford Dictionary of National Biography.