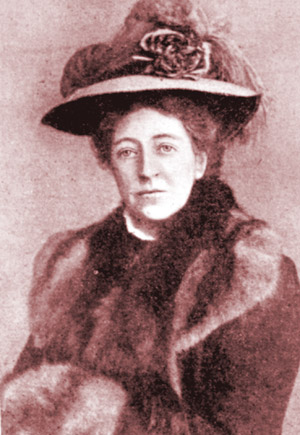 Margaret was born on 19 January 1856 into a wealthy mill-owning family who were Unitarians and strong supporters of the Liberal Party. In 1888 she founded the Manchester Women’s Guardian Association to encourage women to become Poior Law Guardians. In 1900 she was elected to Withington UDC and in 1908 she was the first woman to be elected to Manchester City Council, representing Withington. Margaret was President of the Lancashire and Cheshire Union of Women’s Liberal Associations and a strong supporter of the women’s suffrage campaign joining the North of England Suffrage Society. On 19 May 1906 she was one of the women who addressed the Liberal Prime Minister Henry Campbell-Bannerman as part of a delegation calling on the newly elected Liberal government to give votes to women. She resigned from the Liberal party when they refused to do so. Margaret opposed the militant tactics of the WSPU. In 1909 She founded the suffrage newspaper Common Cause which had offices in manchester.

Margaret opposed the First World war and was one of the 101 signatories to the “Open Letter to German women” at Christmas 1914. She resigned from the National Union of Women’s Suffrage Soceties when it refused to support the Women’s Peace Congress held in the Hague in April 1915. Margaret and other women were prevented from travelling to the Congress by the British government.

As a consequence of the Congress the Women’s International League was founded and Margaret was an active member of the Manchester branch. On 22 July 1917 she spoke at a Women’s Peace Crusade meeting in Stevenson Square, stating that the meeting was intended as the beginning of a campaign in favour of negotiation for peace. The women who had planned the meeting believed that a continuation of the suffering and loss of the war was unneccessary and it was possible at once to open conversations and negotiations which would lead to peace and to peace much more permanent than a smashing victory which would leave hatred and resentment behind it. They believed that the peoples of all the countries engaged in the war were ready and eager to take this course. The women who had organised the meeting appealed to the people to unite in demanding that the government should cease slaughter and begin to talk sense. Police prevented another meeting being held on 8th September.

Margaret’s stance on the war was not popular. On 9 November the City Council excluded her from the Education Committee on which she had served for many years, replacing her with Caroline Herford, who had been elected for St Luke’s ward in February 1917.

In October 1920 Margaret was one of the ten women on a Manchester WIL delegation which went to Ireland to investigate reports of burnings and murder by British forces. On their return they spoke at a packed meeting on 18th October in the Free Trade Hall about some of the shocking things they had heard and seen.

Margaret remained on the Council until 1921 when she stepped down. She retained her interest in the University, the Manchester High School for Girkls and the Women’s International League, despite her failing sight. Margaret’s friends started a testimonial fund which commissioned a potrait of Margaret from Henry Lamb. The painting was presented to her on 6 November 1923 by C P Scott, editor of the Manchester Guardian. However her anti-war stance resulted in Manchester Council refusing to accept the portrait when it was offered to them to mark her seventieth birthday in 1926. (The portrait was lost until it was re-discovered by Alison Ronan, who was researching on women’s history, and finally unveiled in the Town Hall on 4 July 2006.)

Margaret Ashton died at her home, 12 Kingston Road, Didsbury, on 15th October 1937. In its obituary the Manchester Guardian said:

“Margaret Ashton used to say that all her public work was the result of her “tiresome conscience.” She had no joy in publicity, no taste for politics, no actual gift for oratory, no vanity. Perhaps it was this lack of enjoyment in one who enjoyed so many things which gave some of her speeches a touch of asperity liable to be misunderstood. She urged convictions passionately held with no vituosity and with what seemed sometimes like anger at having to spend her life in such distateful iteration.

To herself, as well as to her friends, she was the best of good company. Curious, merry and kind, she was an excellent playmate; hospitable and compassionate, a friend eager to serve. With a hot temper and quick tongue she was most placable, generous in thought and speech, a person “good to disagree with” as a close colleague of hers used to say. “

Alison Ronan, Unpopular Resistance: The Rebel Networks of Men and Women in Opposition to the First World War in Manchester and Salford 1914-1918 (2016)