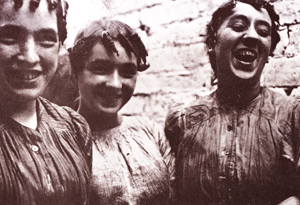 The Minutes tell the story of how a small group of philanthropists, including C. P. Scott, the editor of the Manchester Guardian and Julia Gaskell, daughter of author and social campaigner Elizabeth Gaskell, formed the MSWTUC, which then went onto to be shaped by grassroots activists including Olive Aldridge, Emily Cox, Sarah Dickenson, Eve Gore Booth and Mary Quaile and the many other women and men who worked hard to help women set up their own trades unions and challenge injustice and inequality at work.

The MSWTUC also lobbied at local and national level to improve the social and economic conditions of all workers, including children, influencing legislation and taking part in research and working parties.

The Minutes are fascinating vignettes of the struggle to get women organised into bodies that would lift them out of poverty and exploitation: a historical record that also shows how the campaign for the vote split the organisation with the more radical and working class based activists leaving in the autumn 1904 and setting up the Manchester and Salford Women's Trades and Labour Council. This new organisation campaigned for both trade unions and votes for women, reflecting the mood of working class women trade unionists who now moved over to the more militant MSWTLC. The MSWTUC survived the spilt and in later years worked closely with the MSWTLC, particularly during the First World War.

The story of the twenty four years of the MSWTUC, as told through the Minute Books, is important to women and the trade union movement in today's Britain, holding lessons for all workers on how they can challenge and defeat injustice and poverty and achieve self respect and self-determination.