Miss Guffick . The Chairman reported that Miss Guffick had consented to accept the post of organiser during Mrs Aldridge’s absence and would commence her new duties on Monday May 19. The Annual Society of Corset Makers and Sewing Machinists had voted the sum of six pounds to the Council for organising work.

Industrial Sectional Committee N.U.W.W. It was reported that Mrs. Aldridge had attended a meeting of the Industrial Sectional Committee of the NUWW in London on April 17th at 5.15. The Committee submitted a resolution, asking the Government to increase the number of Factory Inspectors, to their Executive to be placed on the agenda at the annual Congress in October. The Committee were also pressing for laundries to be scheduled under the Trades Boards Act. The next meeting of the Committee would be held on June 12th.

Enquiry re-Leather Workers in London. It was reported that Mrs. Aldridge was making an inquiry as to the wages paid in the London fancy leather works. The interview with Messrs. James Dewsnap and Co. would be held shortly after Whitsuntide.

Painters. It was reported that five new members had joined the Painters Union from Dinting where the highest wages being paid were 11/-.

Gorton Rubber Works. It was reported that a meeting of rubber workers at the Gorton Rubber Works “Ball” Department had been held on April 10th complaints having been received from the girls having to put their hands in the paint to strain it before painting the balls. Two girls had been dismissed for refusing to strain the paint without trimmers. Mrs. Aldridge went twice to interview the manager but did not see him, he sent her word by a messenger that the girls were stopped through slackness. The whole of the works having closed down, Mrs. Aldridge then advised the girls to go in when the works restarted. This course was not adopted, the girls getting work elsewhere. 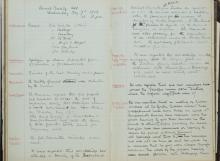 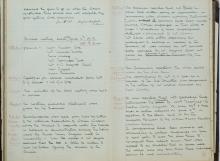