Minutes. Minutes of the previous meeting read and passed.

Finance. The monthly financial statement was submitted by the Treasurer. Attention was called to the deficit and means of reducing the amount of were discussed.

Drawing Room Meeting. Mrs. Findlay and Mrs. Spence kindly promised to endeavour to arrange for a drawing room meeting to be held where an address on the work of the Council could be given and a collection taken in aid of the funds.

Joint Committee of Trades Councils. It was reported that the joint conference convened by the Manchester Trades and Labour Council was held at the Caxton Hall on Tuesday, 27th April at 8.o’clock. Three representatives from each of the invited Councils being present; Mr. Mellor in the chair. Mr. Purcell opened the discussion and urged the need for joint action in extending trade organisation in the district. All present felt it would be useful if a permanent joint committee could be formed but before taking this step felt it desirable to bring the matter before the respective Councils. Another meeting was arranged for Tuesday, May 18th. Mr. Herford moved and Mrs. Cooke seconded “That the Council approves of the formation of a permanent joint committee consisting of an equal number of representatives from the Men’s Trades and Labour Council, the Women’s Trades and Labour Council and the Women’s Trade Union Council, if the joint conference at their next meeting decide on its formation.”

Meetings. The Secretary reported that all the usual business meetings of the Unions were held during the month and that special efforts were being made for a meeting of India Rubber Workers at the office on May 17th and a meeting of Leather Workers on June 14th.

Christian Conference. A circular was read from the Christian Conference asking for representatives to attend a meeting at the Memorial Hall on Wednesday, May 26th convened for the purpose of securing joint action amongst social reform societies for dealing with social questions and if considered advisable to form a central joint committee. Mr. Marr moved and Mrs. Findlay seconded that Miss Cox, Mr. Herford, Mr. Roe and the Secretary be the representatives. 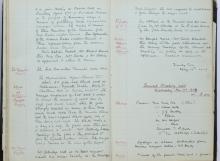 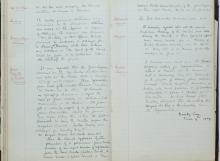