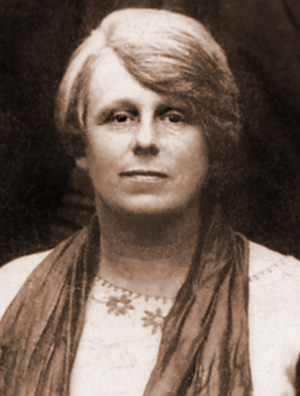 Mary was born in Dublin in 1886 and moved with her family to Manchester around 1889. She left school at 12 working as a domestic servant, and then for a time in Brest where she learnt French, which no doubt proved very useful late r in her life at international meetings. Back in Manchester she became enthused about trade unionism after hearing  Margaret Bondfield speak. Mary started her own involvement in trade unions after she got a job at the socialist  Clarion Café at 50a Market Street and was involved in the formation of a branch of the Café Workers’ Union in November 1909, becoming the Secretary in 1910. The new union affiliated to MSWTUC and Mary attended a number of th emeetings. ( The branch survived until 1918).

Mary was given the job of temporary Assistant Organiser for three months at the MSWTUC to help the Organising Secretary Olive Aldridge  with the office work,  whilst Olive concentrated on work on behalf of the Women  Confectioners society.  The Amalgamated Union of Bakers and Confectioners contributed £25 to pay Mary’s  salary.  She started work on 27 March 1911  working four hours each day in the office . After several extensions her post was made permanent.

In 1912 Mary and Olive attended over 100 meetings with women in different trades and also held 244 business meetings in the office. The 1912 Annual Report noted that the office had become known as a place where working women could come for advice and assistance. In addition to her work for the Council.  Mary was also on the National Insurance Committee of the  General Federation of Trade Unions, eventually acting as Chair of the Committee.

In 1914 Olive became ill and was granted a year’s leave of absence. It might have seemed that Mary was her natural replacement but in fact the job went to a Miss Rose Gardner.  However when the First World war  started Miss Gardner was asked to cancel her engagement,  and Mary was then asked undertake the job of Organising Secretary.”Of her marked ability and unfailing energy the Council would wish to record its warm appreciation.”

During the war Mary worked very hard to ensure that the women being recruited into war work were paid a proper rate. As the work grew she was given some additional help in the office  from Kate Wallwork.

When the Council  was wound up in April 1919 the Council awarded Mary an extra £20 “as a small token of the Executive Committee appreciation of her valuable services and unselfish devotion to the cause.”

Mary became Secretary of the Women’s Group on the Manchester and Salford Trades Council, a position she was hold for many years.  In November 1919 she took the post of National Women’s Organiser  for the Dock, Wharf and Riverside Workers’ Union, a position she retained when her union became part of the Transport and General Workers’ union in 1922, forming the largest union in the country.

Mary  was on the General Council  of the TUC  between 1924  and 1926. In May 1924  she attended  the conference of International Women Trade Unionist in Vienna.  Between April and July 1925 she led a group of trade union women on a TUC delegation to the Soviet Union.  On their return they wrote a lengthy report on what they had seen. During the General Strike Mary spoke  at a large rally in Platt Fields, Manchester on Sunday 9 May.

Mary  worked until 1933 when she retired on ill-health grounds. I n 1934 she   became a Justice of the Peace  in Manchester.  In 1936 she was elected Vice-President of  Manchester Trades Council, the first woman officer of the Council, and from 1936 to 1958 she acted as the  Council’s Treasurer.

In 1951 Mary  was awarded the TUC Silver Badge,  which was given to Trades  Council officers who had held office consecutively for 21 years.  Mary was the first woman trade unionist to receive this medal,  which was presented to her by Sir Luke Fawcett on behalf  of the TUC at a dinner and social evening at Belle Vue Gardens,  attended by 400 people. Arthur Deakin, General Secretary of the TGWU,  sent a message of congratulation.

Mary  died at her home in Withington on 16 December 1958 and was buried in Southern Cemetery in the family grave. Manchester  and Salford Trades Council  in its annual report for 1958-1959, said that Mary had “a vast  knowledge and experience” in trade  union affairs  and  the movement had suffered a great loss.  “She never relinquished her post as Hon. Treasurer, nor did the Council wish her to do so, even though her Doctor had compelled her not to leave the house. Whenever she had a visitor from the Trades Council her face would beam with delight. Any news or information about the affairs of the Movement she was able to glean on these occasions were to her a tonic; to her the Trade Union Movement  was her life. “

More information about Mary can be found in “Dare To Be Free “: women in trade unions, past and present by Bernadette Hyland and Michael Herbert (2016)