Minutes.  The Minutes of the last meeting were read and passed.

Bradford Flax Mill Dispute Settlement. It was reported that the Bradford Flax Mill strike was settled on Wednesday February 7th and all the women and men returned to work on Monday February 12th on the following terms. These terms were submitted through the Board of Trade and a copy of the settlement kept by them.

Women Workers. All pieceworkers to receive ad advance of %5 on the present rates. Girls earning 6s and under to be advanced 6d, per week. Women and girls earning over 6s. To be advanced 1s. Per week.

Male Workers. A minimum wage of £1 per week to all of 21 years of age. Ad advance eof 1s. Per week to all men on weekly wages. 5% advance to all pieceworkers.

Fines. All fine sto be abolished. Gates to be closed at 6am. Re-opened at 6.30am. Workpeople entering at 6.30am to lose the half hour. Workpeople absent at 6.30am not to be admitted until the breakfast hour.

Re-instatement. All textile workers who left work at commencement of dispute to be re-instated.

This Agreement is to remain in operation for twelve months from the date on which work is resumed.

Union and General Federation of Trade Unions Approved Society. It was reported that five unions: Flax Workers, Café Workers, Amalgamated Society of Corset Makers and Sewing Machinists, the Manchester and Sheffield Leather Workers and the Confectioners had joined the General Federation of Trade Unions for purpose of the National Insurance Act. And that three others the Box Makers, Shippers and Clothiers were becoming Approved Societies through their own organisations.

GFTU meeting re-Insurance. The Chairman reported having sanctioned the payment of Miss Quaile’s expenses to London to attend the first general meeting of the Approved Societies (within the General Federation) to be held at the Holborn Town Hall on the 13th inst. This action was endorsed on the motion of Mr. Graeme Cox and Mrs J.J. Findlay.

Secretary’s Visit to Belfast re- Flax Workers Wages. It was agreed on the motion of Miss Cox and Mrs. Cooke that the Secretary visit Belfast before the end of the month to get information re-wages of flax workers in view of the coming interviews with Messrs. Renshaw & Co. at the Broughton Flax Mill. 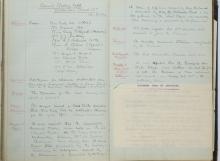 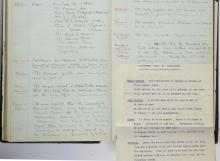 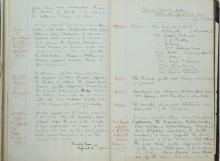