Minutes. Mrs Carpenter cannot join the Council. The minutes of the last meeting were read and passed. A letter was read from Mrs. Carpenter thanking the Council and expressing regret at being unable to accept their invitation to become a member.

Manchester Royal Infirmary and Resident Medical Women. The following letter was received in reply to the resolution re-Women Doctors and the Royal Infirmary:

I am desired by the Committee to inform you in reply to your letter while of the 11th that at a meeting of the Infirmary Committe held on the 9th inst. the following resolution was passed:- “That a Committee be appointed to enquire into and consider the subject of the appointment of medical women candidates to resident posts at the Manchester Royal Infirmary, and to report in writing to the Committee.”

Suffrage meeting of Industrial and Professional Women in the Free Trade Hall. A circular was received from Miss Roper and Miss Eva Gore Booth joint Secretaries of the Committee appointed to organise a Public Suffrage Meeting of Industrial and Professional Women at the Free Trade Hall on March 17th 1909, asking the Council’s help in making the meeting known. Mr. Herford moved and Mrs. Eddie seconded that the Council give all possible help in calling the attention of the Union Secretaries and members to the meeting.

Confectioners Meeting. The meeting for Confectioners was held on Thursday March 4th at the Amalgamated Bakers and Confectioners’ Club at 56 Swan Street. One new member enrolled. As the meeting aroused a good deal of interest amongst confectioners it was proposed to hold a series of fortnightly meetings at the same place.

Cigarette Makers' Union. That the Cigarette Makers, Cutters and Packers Union had won the action brought by them against Mr. Muratti on behalf of their members. Mr. Muratti had given the member a written character, signed an apology & paid costs & damages without the case being taken to court.

Midwives. That the National Association of Midwives was claiming representation on the Departmental Committee appointed by the Privy Council to enquire into the workings of the Midwives Act.

Midwives at Liverpool. That the Secretary had also spoken at a meeting of the National Association of Midwives in the Engineers Hall, Liverpool on March 8th.

Next Meeting. It was agreed to hold the next Council on April 21st as the regular meeting day would come in Easter week. 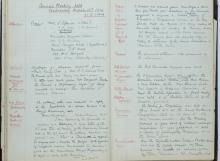 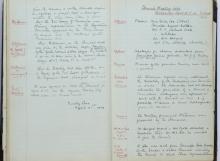