Arising out of the minutes Miss E. Cox gave a report of the conference called by the Anti-Conscription League. Miss Ashton moved and Mrs. Withington seconded and it was carried that a vote of congratulations be sent to Councillor James Johnston on his becoming an Alderman of the City of Manchester.

A memorandum had been received from the Women’s War Interests Committee re-Labour Exchanges. It was resolved to leave the matter over until the next Council meeting and that copies be sent to all members asking them to make a special effort to attend.

A letter was read from the Ministry of Munitions re-the appointment of an Assessor to the Local Munitions Tribunal. Moved by Miss Cox, seconded by Miss Ashton and carried that the Secretary’s name go forward.

The Sub-Committee minutes were read. The Corset Makers Union had become amalgamated with the Clothiers' Union and Mrs. Coppel (Miss Malpas) had been appointed Secretary of the Women Section, two corset makers had been elected onto the Manchester Branch Committee.

Several meetings had been held in connection with Evan’s Saw Mills Newton Heath. 22 girls had been dismissed and the general feeling was that these girls had been victimised because of the active part they had taken in the union. The Secretary reported the matter to Miss Emily Cox and she and Mrs. Findlay decided that a grant of £5.00 be made from the Joint Committee Emergency Fund. Mrs Findlay gave a donation of £1.00 and appeals had been sent to the three men’s Unions concerned in the dispute. A Joint Committee meeting had been held on Sunday, June 4th of all the unions to go into the charge of victimisation and a resolution was passed sending in twenty one days notice demanding the reinstatement of the girls dismissed. Mrs. Findlay moved, Mrs. Withington seconded and it was carried that up to £10.00 of the Council’s Emergency Fund be used for the woodworkers if required. 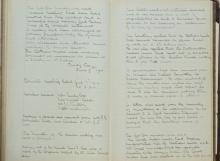 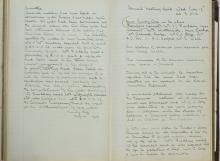