Chancellor of Exchequer. Arising from the Minutes; it was reported that no reply had been received from the Chancellor of the Exchequer to the Council’s letter sent by Miss Cox on June 15th. A further letter was sent on July 10th no reply however had come.

Deputation re-Insurance Bill to Manchester City Council Parliamentary Committee. The Parliamentary Committee received Councillor Margaret Ashton’s deputation on Tuesday the 4th inst. re-the National Insurance Bill when amendments were suggested to many clauses which adversely affected different sections of women workers. Miss Ashton spoke generally of the position of women; Mrs. Margaret Lawson dealt with the Midwifery profession and Mrs. Aldridge and Miss Ashcroft emphasised the unfairness of the rates of contributions and benefits of women workers and with clause 17 which makes it impossible for an insured person receiving board and lodging to receive sickness benefit.

It was suggested that it would be useful to arrange a public meeting to deal with the points covered by the deputation. This was left to Mrs. Aldridge to discuss and arrange with Miss Ashton and to organise meeting if deemed advisable.

Home Workers Organisation Fund. It was reported that several new subscriptions to the Home Workers Fund were received making roughly a total of £26 in promises and receipts. As wider interest was aroused by the special article and correspondence in the Manchester Guardian it was unanimously agreed on the motion of Mr. Herford and Mrs. Cooke “that although the amount asked for has not been received to undertake the task of organising the homeworkers to call in the amounts promised and to appeal for further subscriptions.”

Norwood Blouse Factory. The Amalgamated Society of Corset Makers and Sewing Machinists were negotiating with the Norwood Manufacturing Company for an advance in prices on three lines of blouses very “fancy delaines” shirts and “black silks” to bring the rates to the level of last season. About 140 blouse makers would benefit from the change.

Women Shippers. Mrs. Aldridge attended the quarterly meeting of the Society of Women Employed in the Shipping Industry to assist them in their demand for the recognition of a standard rate. Meetings were also under arrangement for the women employed in all the big warehouses. The Society’s membership was rapidly increasing.

Gorton Rubber Works Disputes Settled. It was reported that settlement of the Gorton Rubber Works dispute took place on June 21st when the agreement was withdrawn by the company. All the men and women returned to work on Monday June 26th.

Café Workers and Shop Hours Bill. Miss Quaile reported that Mr. Clynes had promised to move an amendment on behalf of the Cafe Workers’ Union, for the inclusion of café workers in the Shop Hours Bill.

Typists. Rubber Workers. Mrs. Whittaker moved and Miss Ashcroft seconded that “The Association of Shorthand Writers and Typists and the Society of Women India Rubber Workers be invited to send representatives to the Council.” 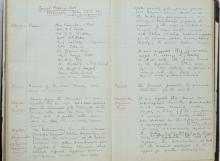 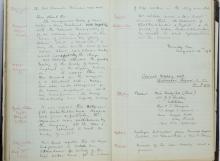