Annual Meeting. It was reported that the annual meeting was fixed for Tuesday, February 7th in the Lord Mayor’s Parlour. The Lady Mayoress would preside and Mrs. C. E. Lees (Mayor of Oldham) and Mrs. Clemintina Black had consented to speak.

Proof Copy of Report discussed. The printed proof copy of the Report for 1910 was read and discussed in detail.

Finance. In the Treasurer's absence the financial statement was presented by the Secretary.

Resolutions of Thanks. A resolution was also carried thanking the Secretary proposed by Sir Charles Schwann and seconded by Mr. Roe.

Mrs. Findlay moved and Mr. Johnston seconded that small subscription forms be printed and circulated at the Annual Meeting. 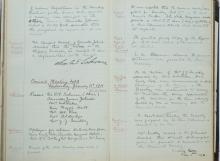