Minutes. Minutes of the previous meeting were read.

Election of Chairman. Arising from the minutes Miss Cox whilst expressing appreciation of the Council’s action in re-electing her, pointed out that the election of Chairman was out of order at the previous meeting and should be made at the meeting following and not preceding the Annual Meeting. On the motion of Mr. Herford seconded by Miss Stapleton Miss Cox was unanimously re-elected Chairman for the year.

Annual Meeting. It was reported that the sixteenth Annual Meeting was held in the Lord Mayor's Parlour at the Town Hall on Tuesday, February 8th at 3.30pm Miss Emily Cox presiding. The Annual Report presented by Mrs. Aldridge and Mr. Herford and its adoption moved by Miss Clemintina Black and seconded by Mrs. Margaret Lawson. The election of Council and officers was moved by Miss Lees (in place of Mrs. C.E. Lees the Mayor of Oldham who was prevented by illness from attending) and seconded by Mrs. J. J. Findlay. Vote of thanks to the Lord Mayor, Miss Black and Miss Lees moved by the Very Rev. Dr. Anselm Poock, seconded by the Rev. C. T. Campion and supported by Mrs. Eddie. The following resolution was moved from the Chair and seconded by the Treasurer.

Confectioners. It was reported that the next organisation work to be undertaken was a six months campaign amongst the women bakers and confectioners in the Manchester and Preston districts. 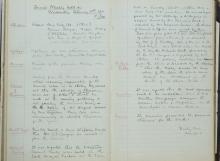