Apologies for absence were received from Mrs. Simon and Miss Ashton.

The minutes of the previous meeting were read and confirmed, with certain additions with regard to the Emergency Fund and Blairs’.

Arising out of the Minutes a letter was read from the Labour Party regarding affiliation.

Annual meeting. Miss Cox reported that she had been to the Town Hall with regard to securing a room for January 23rd, but they stated that they could not let us know whether a room would be available until a week before the meeting. As this notice was so short, Mrs. Withington moved, Mr. Cox seconded and it was agreed that if the Town Hall could not be definitely fixed by Friday December 15th the Minor Hall be booked for January 23rd. It was decided to have 1000 invitation cards printed, and that Sir Charles Swann be asked to take the chair, and failing him, Mr. J. R. Clynes, M. P.

As Mrs. Bamford Tomlinson had not attended the meetings of the Women’s War Interests Committee Mrs. Findlay moved, Mrs. Withington seconded and it was agreed that Miss E. Cox sit on the Committee in her place as the representative of the Council.

The Treasurer presented a financial report.

The Secretary reported the result of a meeting of the Clothing Trade Board held in the Town Hall.

A report on the Conference with M.P.s on food prices was given by Miss Cox.

Mrs Findlay moved Mrs. Withington seconded and it was agreed to send the following resolution to the Manchester Society for Women’s Suffrage: “This Meeting (or Conference) considers it essential that any measure of franchise reform which is proposed during the present session should include the enfranchisement of women on a broad and democratic basis, so that they shall be represented by the Parliament which deals with the problems of reconstruction inevitably rising immediately after the war.”

The Sub-Committee minutes were read. A letter had been sent to Miss MacArthur asking for an interview with regard to the organisation of women munition workers and a reply had been received stating that she would be in Manchester during the third week in January, and would be pleased to meet the Council during that time. As the matter was urgent it was decided to ask Miss MacArthur if she could possibly come during the last week in December, or the first week in January, and if this could not be arranged, to ask for her free dates during the third week in January.

The strike at the Leather Works had been satisfactorily settled, the women having received an advance of 2/-per week and the recognition of the Union.

All the women at ? and ? had joined the Union, and a letter had been sent to the firm asking for an interview, when the demand of 6d, instead of 5 per hour, was to be asked for. 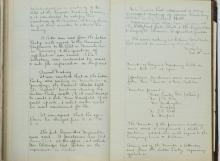 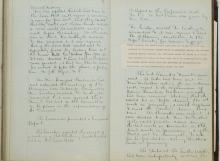 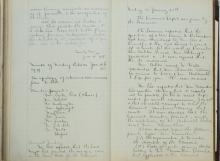