The Secretary was absent through illness.

Women Shop Assistants. Miss Cox moved and Miss Hall seconded that the Women’s Section of the Shop Assistants Warehousemen and Clerks be invited to affiliate with the Council and appoint a representative.

Clothiers’ Minimum Rates. The following resolution is placed on the agenda at the request of the Amalgamated Society of Clothiers’ Operatives –was moved by Mr. Herford, seconded by Mrs. Findlay and carried. “That the meeting expresses its disapproval of the low minimum time rates proposed by the Tailoring Trade Board and requests that such minimums be referred back to the Board with instructions to fix such minimums as will allow of a decent living wage to all workers male and female.”

Secretary’s Salary. Mr. Herford moved and Mrs. Findlay seconded “that in view of the rapid increase in the work of the Council and in recognition of the valued services rendered by Mrs. Aldridge that her salary be raised to £120 per year to begin from October last.” Carried.

Assistant Secretary. Miss Cox moved and Mrs. Tawney seconded that Miss Mary Quaile be appointed for whole instead of part-time and to receive £65 per year. This rate of pay to date from October last. Carried.

Home Workers. It was reported that the Drawing Room meeting on behalf of the Homeworkers’ Association arranged by Mrs. Payne was held at Mrs.Nuttalls, Raynor Croft Bowden on December 8. Canon Ainsworth presided. Miss Emily Cox and Mrs Aldridge spoke of the need for organisation amongst homeworkers’. Mr. Harry Nuttall M.P. was present and spoke at the close of meeting. The sum of £5.1.6 in subscriptions and donations was received on behalf of the fund.

It was reported that the Bradford Flax Mill dispute was still going on and would in all probability continue till the New Year before any settlement could be looked for. It was proposed to raise a special Christmas fund for the men and women in addition to the ordinary relief fund.

Rag Sorters. It was reported that 20 rag sorters had struck work at Sieffs, Dawson Croft, Greengates owing to the introduction of piece-work. The rate offered was 1/- per cwt and this the women contended if accepted would materially lower their weekly wages and other firms were paying more than double the price. Mrs Aldridge interviewed Mr. Sieff twice, on December 6th at the second interview the 20 women were present. Mr. Sieff explained that he never intended to offer this price for “ mixed clips” but only one bag of these to be mixed with a given quantity of “common clips”. He admitted that if more than one bag of common clips was given wages would be lowered. The women had understood that the 1/-would apply to all.

Unfortunately owing to slackness there was very little work but the women preferred to take their chance of work elsewhere than return to Sieffs.

Moseley’s Rubber workers. A dispute also occurred at Moseley’s Rubber Works in the tyre department. There were two lines of work paid at rates of 2 ½ and 1½–the management’s proposed to reduce the first amount and pay 1 ½ for both. This would mean was on occasions the loss of 1/6 per day for the women. The women 40 in number struck work and were out for one day. They sent a deputation to Mrs. Aldridge who promised to deal with the matter. When the deputation returned to the works they were met by the manager and told that the reduction would not be made. The majority of the women had joined the Rubber Workers’ Union.

Blair’s Corset Works. Reduction prevention advance gained. It was reported that a dispute had occurred at Blair’s Corset Works on February 8th. An alteration entailing additional work for the stitchers was made in a line of work. The former price was 2/- per dryer-the manager proposed to raise it to 2/6. The stitchers contended that the proper price to cover the additional labour should be 3/6 and although the price was further raised to 3/-still held for the 3/6. The quickest worker after several weeks experience could only earn slightly over 5 per hour on time work and she was more experienced than the others in work requiring close attention and care. It was contended that the ordinary worker should get 5 per hour. Several meetings were held which Miss Emily Cox and Mrs Aldridge attended and Mrs Aldridge interviewed the manager twice with the girls. After three and a half days cessation of work the 3/6 was conceded by the firm.

The usual monthly meetings of the Unions had taken place.

Annual Meeting. It was agreed to hold the Annual Meeting early in February provided the use of the Lord Mayors Parlour could be again secured. It was proposed that Mrs. Despard should be invited to be the chief speaker. 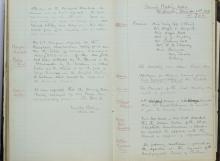 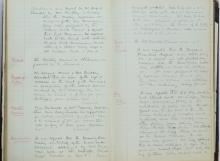 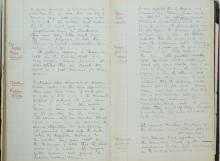 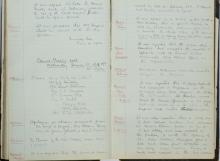