Box Makers and Clothiers. Letters were read from the Secretaries of the Box Makers' and Clothiers’ Operatives Union, the former appointing a representative to the Council and the latter saying the invitation will be brought before their next meeting.

Finance. The month’s financial statement was submitted by the Treasurer.

Sub-Committee Minutes. Clothiers. Report to Factory Inspector. The minutes of the Organisation Sub-Committee were read. These showed that many meetings had been addressed for the Clothiers’ Society and that a firm (Forshaws) had been reported to Miss Squire for charging many girls for hot water which they did not use. Also that Mrs Aldridge had attended a meeting of Leather Workers at Sheffield with Miss Stapleton the Union Secretary.

Messrs. J.Dewsnap Limited Sheffield. It was reported that two leather firms Messrs. Dewsnap and Co. and Messrs. Peace and Co. one employing 50 at time rates and the other 20 girls at piece-work rates had amalgamated. After the amalgamation notices were posted in the work rooms to the effect that all would be expected to work at piece rates on and after Friday April 8th. The 50 girls could get no satisfactory information from the management as to what the piece work rates would be and what evidence could be obtained showed that a lowering of wages amounting in some cases to 3/-or 4/-could be expected. The wage sheets of one girl who had worked for eight months at piece-work showed an average of a fraction over 4/3 year per week.

The girls felt that the change should be resisted and wrote to Mrs. Aldridge for advice and assistance. Mrs. Aldridge with Miss Stapleton (Secretary of the Women’s Union of Fancy Leather Workers) visited Sheffield on Saturday, April 2nd and met all the girls affected. The Sheffield Branch of the Union was re-formed and a committee appointed consisting of a representative from each of the twelve sections of the trade. A protest was sent to Messrs. Dewsnap and Co. Several meetings followed and an interview with the firm took place at the Wentworth Cafe, Pinstone Street, April 11th. The firm was represented by the Chairman of the Directors (Mr. Black), his Secretary (Mr.Revill) and the manager of the works, the Committee of the Sheffield Branch, Mrs Aldridge, Miss Stapleton and two members of the Men’s Society representing the Union. No settlement of the difficulty was reached. The Chairman of the Directors however offered to submit a complete statement of piece rates, with proper time for discussion –this offer was accepted and it was arranged that after seeing the list another meeting should be arranged to either reject or accept the proposed change. The list would be ready and sent to the Sheffield Secretary in a fortnight from the interview. 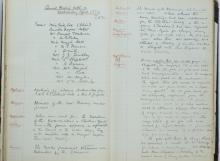 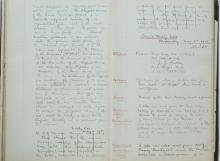