Wood Workers’ Union. It was reported that the joint meeting of the Wood Workers’ Union and the Packing Case Makers, with regard to the amalgamation, would be held on April 16th at 7 pm. It was decided that Miss Cox, Mrs. Withington and Mrs. Findlay, along with the Secretaries, attend the meeting of behalf of the Council.

Election of Chairman. Miss Emily Cox was elected Chairman of the Council for 1918.

Finance. The financial statement for the month was given by the Treasurer.

Miss Cox reported that she had interviewed Mr. Mellor, with regard to the financial position of the Council and the replies received in answer to the Joint Appeal, and he had promised to bring the matter before the next meeting of his Executive.

New E.C. Members. It was moved by Mrs. Withington, seconded by Mr. Herford and agreed that Mr. Mellor of the Trades and Labour Council, and Mrs. Hall, of the Asylum Workers Union be invited to become members of the Executive Committee.

Miss Cox brought before the meeting the question of regulation 40 D of the Defence of the Realm Act, and the following resolution was proposed by Mrs. Findlay, seconded by Miss Ashcroft and carried:-

“That the Manchester and Salford Women’s Trades Union protests strongly against regulation 40 D of the Defence of the Realm Act, which virtually reintroduces the medieval examination of women accused of conveying disease of members of His Majesty’s forces, on the ground that men, as well as women are sources of infection, that the government was unable last year to proceed with the Criminal Law Amendment Bill because of the public opposition to a similar clause in it, and further, such a course is against the considered findings of the Royal Commission on Venereal Disease.”

Sub-Committee Minutes. The Sub-Committee minutes were read. A new branch of the National Federation has been formed at Crossley’s Aircraft Department, Levenshulme.

Miss Quaile had spent a week in Sheffield organising for the Leather Workers’ Union. Many new members had been made. 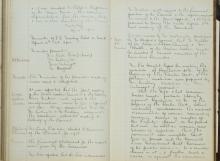 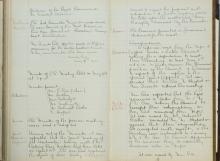