Meeting of 2 previous meetings. Minutes also read of the last two afternoon meetings for the benefit of the members able to attend only the evening meetings of the Council.

Cigarette Makers proposal for an increase in prices. The Secretary reported that owing to the very rapid growth of the membership of the Cigarette Makers' Society the Union Committee had decided to place before a general meeting of Union members a new price list with a proposal demanding an intermediate increase of price work rates from the cigarette making firms. Mrs. Aldridge considered the step premature in view of the very recent formation of the Union. The Council felt that if the step were taken the Union’s existence would be jeopardised.

Meeting to be attended. Mrs. Tomlinson moved and Miss Reilly seconded “that Miss Emily Cox and Mr. John Harker be asked to attend the Cigarette Makers meeting with Mrs Aldridge and suggested that the demand for increase of prices be deferred for a short time to enable the Union to strengthen its forces”. Carried

Business meetings of Unions. The organisation report showed that 14 committee meetings and 5 general meetings of the Unions had been attended by the Secretary.

Rubber workers. A meeting of India Rubber workers would be held on April 17th at the Caxton Hall -all Frankenbergs girls had been invited and an effort to would be made to form a Women’s Union.

Sheffield Leather Workers ask for services of the Council. Mr. H. Hughes reported having been requested by the Sheffield branch of his Society to ask the Council for the services of Mrs Aldridge for a meeting at Sheffield as an attempt was being made to organise the Women Leather Workers. This was agreed the date to be left to Mr. Hughes and the Secretary. 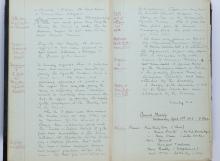 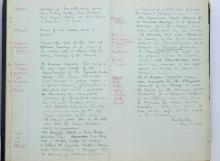