Letters of apology for inability to attend were received from Mrs. Schwann & Mr. Arrandale & Mr. Brocklehurst, Rev. F Green, Mr. Flux, Mrs. Hyland. An ad interim report of the work done by the Investigation Committee during the first 6 months of its existence was read. 83 factory workers had been seen. As 18 of these proved to be working in India Rubber factories special attention had been concentrated upon them. The wages of garment workers seemed to be good varying from 14s-20s. The wages of blowing room workers were lower 8s-10s. The girls seen were working for 4 different firms 3 of whom provide dining rooms. 8 out of 18 girls seen, believed their work unhealthy, though they had been able to do it for years.

With references to fines & deductions out of 60 women who gave information 31 were not fined at all, & 29 were. The 29 fall into 3 groups. Group I containing 22 girls paying small (1d or 2d) fines. Group II containing 4 girls paying 3d for being ¼ hour late, & one girl charged 2d per week for hot water. Group III containing 2 workers 1 fined 8d if an hour late, & and another charged 6d a week for steam & required to pay for her own cotton at 2 ½ for reel.

61 home workers had been seen. 40 were pocket handkerchief hemmers. The fact was clearly shown that better wages were earned by the women who did not get it from a contractor. Mr. Flynn desired that some opinion should be given as to home work in general, & that in future investigations two points should be borne in mind if possible

Mr. Mosses moved & Mr. Flynn seconded that the report be approved, & the Investigation Committee complimented upon it. This was carried.

It was then reported that information was being accumulated in regard to laundries & the fair list, which it was desirable that a sub-Committee should deal with. Mr. Mosses moved that Mr. Flynn & Mr. Hodge seconded should be asked to serve on this sub-Committee. Mr. Flynn consented, & the motion was carried. It was further resolved that Miss Bulley, Mrs. Eckhart & Miss Wilson should compose the sub-Committee.

Mrs. Dickenson gave a report in regard to the organisation work which had been done during the summer months. The Union of Folders & Sewers was making good progress, the membership had now reached 105.

The membership of the Umbrella Workers Union decreasing owing to lack of employment & the consequent inability of the women to keep up their subscriptions. Since the Union had been started £11-19-7 had been paid in by the workers, but £10 had been paid out in sick & out of work pay. It was hoped that a meeting to be held shortly would increase the membership & improve the funds which were at a low ebb. A donation of £1 had been generously given towards the Umbrella Workers Funds by Mrs Schwann.

A round of dinner hour work visits to shirt-making work rooms had been paid in June & July which had resulted in an increase of about 40 members to the Shirt & Jacket Cutters & Shirt-Makers Union.

Miss Hertz moved & Mrs. Arnold seconded that the quorum of the executive be reduced from 4 to 3. Mr. Mosses spoke against the motion Mr. Dickson & Mr. Hamilton supported it. It was put to the meeting & lost. Mr. Mosses proposed & Mr. Hodge seconded that any member of the Executive failing to attend three consecutive meetings without giving any explanation, should be deemed ipso facto to have resigned.

This was put to the meeting & carried.

A discussion then took place as to the most convenient time for holding the Council meetings.

It was proposed by Mr. Hodge & seconded by Mr. Flynn that the meetings should be held in the afternoon.

It was proposed as an amendment that the meetings should be held in the evening. Mr. Hodge & Mr. Carter. The amendment was carried.

The question of sending delegates to the Conference of Women Workers was next considered. It was proposed by Mrs. Arnold & Miss Bulley seconded that Miss Ashwell & Mrs. Dickenson should be appointed. This was carried.

A leaflet which it was proposed to print & circulate at the Women's Conference asking for subscriptions was then read & approved. It was desired that an addition should be inserted as to the amount of the present income.

The date of the next Council meeting was then fixed for December 8th Tuesday.

The Chairman announced that one of the organisers (Miss Welsh) had married since the last meeting of the Council. At the time of her impending marriage she wrote to the honorary secretary stating that as the question of the employment of married women was a vexed one, the Council might object to her retention of her post on principle, and that she therefore offered to resign.

Mr. Hodge stated that valuable as was the work done by Mrs. Dickenson he objected on principle to the employment of married women, and that he therefore begged to move that two months notice be given to Mrs. Dickenson. Mr. Mosses seconded.

This was put to the meeting.

The motion was lost.

Mr. Dickson moved, & Mr. Flynn seconded that the question be deferred for 3 months but in the event of Mrs. Dickenson tendering her resignation in the meantime, the Executive Committee be empowered to take steps to secure a successor. This was put to the meeting

The motion was therefore carried. 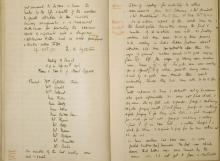 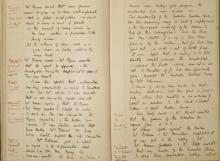 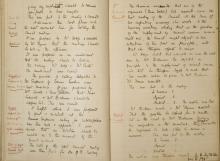