Arising out of the minutes it was reported, that the question of the men striking against the Pittsburg system at the Linotype Works, in which the women might have been involved, had fallen through, owing to the Council of the Engineers refusing to entertain the idea.

The Treasurer’s Financial Statement  for July & August was read & passed.

It was reported that a meeting of weavers had been held at St. Thomas’s schools on July 17th when about 100 attended.  After the meeting names were given in of those of willing to join a Union.  Since the meeting several weavers had attended at the office to discuss the best means of forming a branch in that district.  Efforts were being made to get  a room  near where the majority of the weavers lived & hold weekly meetings.  Bills to be distributed announcing that a branch would be opened in Pendleton & inviting the weavers to attend the meetings & join.

At Howarth’s Mills larger shuttles were being put in some of the looms and four loom weavers were being given six looms to mind while two loom weavers were given three.  The firm contended that with larger cops  in the shuttles the looms would not require to be stopped as often, also the weft used was said to be of better quality.  Each cut off three looms had been reduced 2d.  One weaver with six looms had earned 3s/4d more in one week, than she usually earned on four looms.  The firm had gained 8s 8d on the week’s working at the reduced rate.  The Weavers' Committee had discussed the situation & it was decided that Mrs. Dickenson should consult Mr. Wilkinson (Amalgamated Association of Weavers) about the matter,  samples of weft & cop being supplied, also the particulars as to quality of cloth being wove.

Miss Kay reported that she had visited workshops & distributed bills among the tailoresses.  Meetings had been held at Marsdens & at the office.  The tailoresses at Marsdens seemed afraid of joining, several of them having given in their names & then withdrawn.  It was suggested by Mr. Entwistle that another meeting should be arranged.

Miss Crompton kindly promised a room at the Settlement for a meeting among Hammond’s tailoresses & others in that particular district.  Miss Kay gave the council some particulars as to stoppages which were made from tailoresses wages for cotton & trimmings etc.  A case had been reported of a tailoress who worked for a middleman & had had a pair of trousers returned to her slightly damaged, she had been told that she would have to pay for them, although it was uncertain whether she had caused the damage.  The Council urged that the union should take up & resist any stoppage from her wages.  Miss Kay arranged to see the tailoress & instruct her in the matter.  Mrs. Hobhouse read the minutes of the sub-Committee.

Copies of the Folders and Sewers report was passed round which showed that their membership had increased. 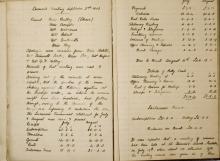 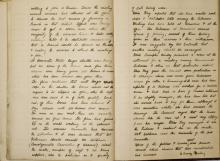