Mr. Hamilton proposed and Miss Hertz seconded that Miss Bulley be asked to accept the chairmanship of the Council. This was carried unanimously, and Miss Bulley then took the chair.

(nb the following resolution was added in on the margin of this page.

The Executive Committee accept with much regret Mrs. Lyttleton’s resignation of the chairmanship. They desire to record their appreciation of her service during the first 2 years of the Council’s existence & to express their grateful thanks”. Carried)

Mrs. Schwann said that she had received a letter from Mrs. Eckhart who wished to resign her membership of the Council owing to pressure of other work. The resignation was accepted with regret. The minutes of last meeting were read and passed.

A report was then given as to the state of the various unions connected with the Council. Mr. Browndhead Secretary of the Am I. Rubber Workers had been seen & stated that notwithstanding the fact that a guaranteed wage had been procured for the women by the union, they all had withdrawn. Mrs. Dickenson promised to endeavour to set up a meeting & see if they could not be induced to continue their membership. Enquiries as to the wages of the Linotype girls had been made, & it appeared that the average earnings are as follows:-

The Society of Women in Printing Trades was in a flourishing condition. Its membership remained nearly stationery at 130-140, but it was intended to hold a social evening in November & to make other attempts to bring in new members.

The Upholsteresses' Society had since the last meeting of the Council asked for an advance in wages of 2s per week. With the exception of two firms employing only a small number of trade unionists, the advance had been granted without any difficulty, & the wages now stood at 16s per week.

A small union among women employed as trouser makers had met at the office during the summer months, but although the organising secretaries had visited many workrooms distributed bills, & explained the need of combination, the women were falling away from the union.

The Federation of Women Workers had sent a sum of £5 to the General Labourers out of work through the Engineers strike.

It was intended to hold meetings at the office during the winter months for women employed in various trades, with a view to increasing the membership of the existing unions.

A letter was then read from Miss Webb stating that the Women’s Industrial Council London were calling a conference on November 23rd of Councils, the Women’s Cooperative Guild, the Christian Social Union & some representatives of Women’s Trade Unions to consider proposals based upon investigation for further restrictions of Home Work. The Conference would discuss the subject and formulate resolutions to be moved at a public meeting on the evening following. The Manchester Salford and District Women’s Trades Union Council were invited to send representatives to the Conference.

Some discussion followed in which the opinion was expressed that while sympathising with the objects of the conference the Manchester Salford & District Women’s Trade Union Council was yet hardly prepared to commit itself to a programme.

Mr. Hamilton moved & Professor Weiss seconded that the matter be referred back to the Executive to decide.

A circular from the Women’s Trade Union League was read urging the Council to pass a resolution protesting against the curtailment of the powers of the new Chief Lady Factory Inspector Miss Anderson & send it to the Home Secretary. It was resolved that this should be done. Mr. Herford proposed & Mr. Hamilton seconded that

"Having heard that there is some doubt as to whether the present Chief Lady Factory Inspector will exercise the same powers as the former Superintending Lady Factory Inspector, this Council desires strongly to deprecate any curtailment of her powers feeling convinced that they have proved in the past a very valuable protection to working women."

Attention was next called to the urgent need of funds to carry on the work of the Council. Notwithstanding some new subscriptions and donations the Bank Balance stood at £16-16 & a sum of at least £40 was required to carry on to the end of the financial year. 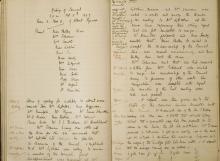 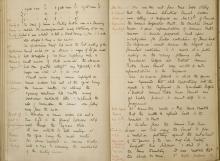 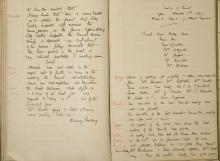