A letter was read from Miss Ashton asking the Council’s support for a meeting in the Free Trade Hall to be held by the Women's Cooperative Guild as a protest against Protection.  The meeting was not connected with any party organisation.  The following resolution was passed “That the Womens Trade Union Council are willing to take part in the meeting on the understanding that it is not under the auspices of any political body.” Moved by Mr. Johnston seconded by Miss Gaskell and carried.

Miss Bulley that she had attended the conference of Trade Unionists & Cooperators in favour of Free  Trade, and had spoken to the resolution as representing the Council.

The Treasurer's Report was read and passed.

The  Secretaries were instructed to get an estimate for a new carpet for the office.

It was reported that a meeting had been held by the Weavers to discuss the question of amalgamation with the Northern  Counties Union.  Miss Bulley and the Secretaries had attended the meeting. It had been decided that for the present it was practically impossible to join the Amalgamation, as the Weavers' funds would not allow of their paying the Amalgamation fees of 1d per member per week.  Also the Amalgamation objects to the paying of sick benefi”.

A meeting had been held for the electric workers at Trafford Park,  about 30 were present.  Books had been taken into the works to collect signatures of those who were willing to join the union.

The Federation of Women Workers had been considering the question of changing their name as confusion  had arisen, & the Council expressed themselves as favourable to this course.

It was reported that there was a deficit of £3.0.0. in the funds collected for the Tailoresses' organiser.  A resolution was passed empowering the Treasurer to hand over this sum to the Secretaries. 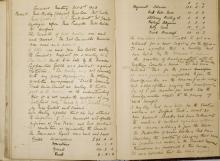 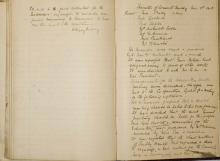