Apologies from Mrs. Roberts & Mrs. Schwann, Miss Spencer’s resignation (owing to her leaving Manchester) was regretfully accepted by the Committee. It was reported that the electric light would be charged for according to the amount used. The Council decided on its introduction into the office. A letter had been received from Miss Wilson re Legal Advice Committee in which she said that no agent had as yet been established in Manchester. It was reported that the Coop Directors had promised to interview Miss Kay. Mr. Entwistle suggested that the prices paid by other firms in Manchester should be ascertained. The Secretaries were instructed to procure more information on this subject.

Re Finance. Miss Ashton moved that an overdraft of £50 be arranged for at the Bank. The following members of the Council be asked to guarantee £10 each Miss Gaskell, Miss Ashton, Mr. Schwann, Mr. Mather and Mr. Scott . Seconded by Mrs. Cooke and carried. The Secretaries were instructed to arrange this with Mr. Herford.

A difficulty had arisen re distribution of work in the Bookbinding trade. A meeting of Folders & Sewers was to be held on Monday October 7th. The men had urged the women to refuse certain work and if need be to come out, on the grounds that this work should be done by men. The matter would be discussed and decided at the meeting, at which the Men’s Society would be represented. 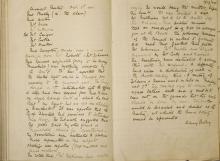