The Sub-Committee minutes were read by Miss Cox.  It was reported that a weaver at Armitage  Mills in Pendleton had lost a finger by an accident in the mill and had wished to obtain compensation.  Three different lawyers had been consulted, also Mr. Wilkinson (Secretary Weavers' Amalgamation).  It was the general opinion that under the circumstances it would be impossible to get any compensation, but  Mr. Oppenheim had expressed his willingness to undertake the case.  The firm had found the weaver employment in the warehouse where she (a girl of 15) received the same wages as she had before  the accident (9/-).  The law did not take into account the fact that she had to give up her skilled trade & that her earning capacity was crippled for life.  However Mr. Oppenheim had been able to make an arrangement with the employer and  the Insurance Company by which the weaver received £10.  The lawyers fee was £2. 2.  The council decided that a 2/6 collection should be made among the members of the council for legal expenses.

Meetings had been held in Pendleton for weavers.  They had been badly attended at first, but at the last meeting 107 were present.  They had all joined and a branch of the Weavers' Union had been opened in Pendleton.

The Salford Weavers first bi-annual meeting had been held at S Bartholomews schools.  About 500 were present.  ( cutting from newspaper pasted in).

The sixth loom weavers had had a meeting.  They were unanimous in complaining of the reduction of 2d per cut.  1d was quite enough.  However a new arrangement was being made by which the weavers would be put on standing wages, & they were fairly satisfied with the prices offered 25s/-.

The Secretaries had interviewed  Mr. Turner about Miriam King, & he had promised to give her work as soon as possible but she was at present working in Pendleton.

Miss Kay  reported that Miss Daplyn had received 6s/-from Miss Ashton’s contribution.  She is at work again but is receiving lower wages than formerly. Re meeting for Tailoresses had been held at Ancoats and another was arranged for November 26th.

The Treasurer’s Report was read and passed. 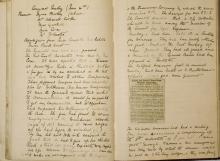 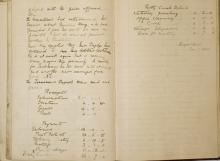