Finance. The Treasurer then reported on the month’s finance- expenditure for the month had exceeded the income. Several members undertook to appeal for new subscriptions.The Secretary was instructed to see the new Secretary of the M/cr Trades Council & ask if an appeal for financial help was sent to all the trade organisations in the district his Council would be willing to endorse the appeal.This was moved by Mr.Mallon & seconded by Mr.Hughes.

Evening meeting for Unions. The next business was discussion of the advisability of holding an evening meeting for the union members –as so few of the members were able to attend the afternoon meeting at the Town Hall on Feb 7th. It was reported that Mr.J.R.Clynes M.P. would be in Mcr on March 24th  & the Secretary was asked to write to him & ask if he would be willing to address a meeting for the Council, if arranged, during his visit.

Report Annual Meeting. Miss Bulley reported that the Annual Meeting had been held on Feb 7th  in the Lord Mayor’s Parlour. The Lady Mayoress had kindly provided tea & received the guests previous to the Public Meeting at 3.30pm.The Lord Mayor presided & the meeting was well attended. The “Report” was introduced by the Secretary & its adoption moved by the Lord Mayor & seconded by Miss A. Amy Bulley. Other speakers were Rev.Charles Peach, Councillor T.R. Marr, Miss Margaret Ashton & Councillor J. Johnston. A feature of the meeting was the attendance of the mothers of many union members.

Sweated Goods Exhibition. The Secretary reported that Mr. Marr, who was unable to be present, had suggested the advisability of sending exhibits from Mcr to the  “Daily News Exhibition of Sweated Goods” which would be held about July of the present year. Also if possible to secure removal of the Exhibition to Mcr. The matter was discussed & left over to the next meeting when fuller information could be obtained & further suggestions could be made  by members. It was resolved to ask Mr.W.C. Anderson (Organiser for the Shop Assistants Union) to join the Council. 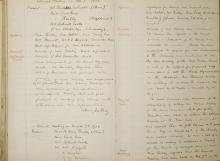 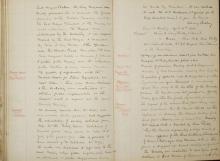