It was reported that a new union had been founded called “Association of Patent Cop Winders Bobbin & Hank Winders Gassers Doublers and Reelers”.  A meeting had been held for the Masonic Mills in the Salvation Army Hall Ancoats.  Over 100 had joined and another meeting had been arranged.  Canvassing was being done and a Committee and officers had been selected from among the women.

Mr. Herford’s Report was read & the financial position discussed.  The deficit being £57.  95 it was decided that some effort should be made to decrease the adverse balance.  Miss Ashton proposed that  drawing room meetings should be held in different districts near Manchester, Oldham,  Bolton, Eccles , Alderley.  The question of speakers and hostesses was discussed.  Mrs. Schwann suggested that Mrs.?  Mrs.Emmott  should be asked to lend drawing rooms.  Mrs. Heywood & Mrs. Mabberley (Eccles)  were also to be asked.  Miss Ashton undertook to write to these ladies.  It was decided to ask Miss Ford to speak.

It was reported that the weavers at Howarths had got tired of waiting for Mr. Turner’s answer, and after sending another deputation to him had taken the matter into their own hands stopped the looms & gone out.  They had then sent a deputation to Mr. Howarth & on his promising to look into the matter, they went back to work.  Since that Mr. Howarth had given the four loom weavers an advance of 1s/-but the position of the six looms weavers, which is most unsatisfactory, remains untouched.  A meeting had been held & the matter thoroughly discussed with the weavers who are unanimous in demanding a better rate for the six looms, but have decided to wait a month for further developments. 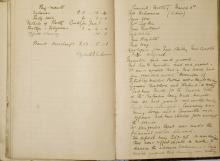 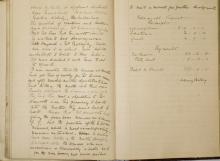