The minutes of the last meetings were read and passed.

A report was given of the work which had been done.

The Jewish Tailoresses' Union continued to prosper & the membership has now increased to over 100.

Owing to reductions which had taken place at Messrs. MacIntyre Hoggs Shirt Factory Blossom Street Ancoats, the workers had become dissatisfied & two meetings had been held to induce them to join the Shirt Makers Union. On February 28th a meeting was held at the Duke of Albany Coffee Tavern, Oldham St, at which Mr.Councillor Brocklehurst, Mr. Harker, Mr. Bell, Miss Ashwell, Mrs. Dickenson & Mrs. Coleman spoke.

On March 25th another meeting was held at St. Peter’s schools, Blossom Street, Ancoats at 1.30, at which Mr. Bell, Mrs. Dickenson & Miss Ashwell spoke. Both meetings were well attended, & as a result, the membership of the Shirt Makers Society had been increased. This Society had taken up the case of the Button Holers at Messrs. Macintyre Hoggs whose prices had been reduced to 2d per dozen shirts (120 buttonholes on some classes of shirts) the workers being required to cut the buttonholes, & provide cotton. Enquiries were made as to the prices paid by other firms, which showed that Messrs. Macintyre Hogg were paying at a very low rate. A deputation had been appointed to wait upon the firm & negotiations were pending.

Thirty girls employed as a Stationery Sewers at Messrs. Bradshaw & Blacklock’s had joined the Society of Women Engaged in the Bookbinding & Printing Trades, & brought their grievance before the Union. They were all journeywomen in receipt of standing wages of 9s & 10s per week, instead of 12s the standard rate. Every month they were required to work overtime on a railway guide, which increased their wages. Their contention was that they ought to receive 12s per week, & overtime payment. They further complained that they were required to work overtime & paid at too low a rate on another kind of work sent by the Manchester Corporation. The case was being investigated & the Union intended to take action in the matter, when a suitable occasion arose.

A meeting had been held on March 16th for the Tailoresses working at the Cooperative Wholesale Society, Trafalgar St., in the dinner hour. It was not well attended. Miss Ashwell, Mrs. Dickenson & Mr. Flynn spoke, & Mr. Flynn explained the new scheme for the organisation of Tailoresses which the Amalgamated Society of Tailors had resolved upon by which the subscriptions were to be 1 1⁄2d & 4d per week, entitling the worker in one case to strike pay, & in the other to strike, sick & out of work pay and funeral benefit. It was intended to ask for permission to hold another dinner hour meeting in the dining room at the works.

Mrs. Dickenson reported that the Federation of Women Workers had held their annual meeting on March 28th, at 66 Grosvenor St., Mrs. Arnold in the Chair. The subscriptions for the year had amounted to £49.17.1 of which £11.14.6 had been paid for sick & out of work pay, leaving a balance in hand of £131.12.1. A grant of £10 had been voted to the funds of the Womens Trades Union Council. The membership now numbered 90.

Miss Ashton proposed & Mrs. Arnold seconded a vote of condolence to Mrs. Alexander Forrest, on the death of Mr. Forrest. It was resolved that a letter should be written by the Chairman of the council expressing sympathy, and the regret of the members of the council at the loss of Mr. Forrest who had so ably filled the office of Treasurer for the first three years of the Councils existence.

Miss Ashton proposed & Miss Bulley seconded that Mr. H.V. Herford be asked to accept the Treasurership of the Council. Carried unanimously. Mr. Herford accepted the office. A statement of accounts was then placed before the council. The subscriptions had amounted to £60.16.7d, but the expenses for the first three months had been £53.15.10, leaving a balance of £7.0.10. The need of increased funds was urgent, & arrangements were made to approach a number of likely subscribers.

Miss Bulley then stated that a conference of Cooperators & Trade Unionists was to be held at Downing St. on April 16th, to discuss a paper on The Relations of Co-operation & Trade Unionism. The Council nominated Mrs. Arnold & Miss Bulley as their representatives.

It was resolved that the next Council meeting should be held on Tuesday June the seventh.

It was also pointed out that considerable difficulty had for some time been experienced as to obtaining a quorum of members of the Executive Committee.

Miss Ashton proposed & Mrs. Arnold seconded that the quorum of the Executive be abolished.

The motion was put to the meeting & lost.

Miss Ashton then proposed & Mrs. Arnold seconded that the quorum of the Executive Committee be reduced from four to three members. The motion was put to the meeting and carried. 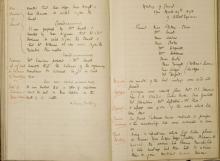 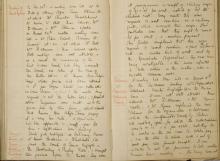 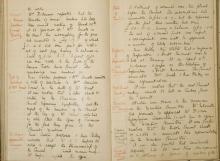 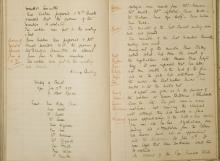