The minutes of the two latest meetings of the Executive Committee  (February 6th & February 20th) were also read.

Mrs. Dickenson then gave  a statement as to the financial position of the Federation of Women Workers.  The sums of £19-4-0, & £10-10 had been disbursed during the year for sick & out of work benefits respectively.  The balance sheet issued on January 31st 1900 showed that when all financial claims had been met the bank balance was £126-17-5 an increase of £1-0-10 on the year ending January 31 1899.  The membership had increased up to 1.

(This was written in the margin). “It was proposed by Mr. Entwistle & seconded by Mr. Harker that the Trades Council be asked to appoint a second auditor to the Federation of Women Workers.”

A report was next given stating that no definite answer had yet been received as to the wages question raised by the deputation which waited on Messrs. Bradshaw & Blacklock on February 1st.

A meeting of the members of the Fancy Box Makers' Union had been held in the office on February 27th which was well attended.  The number of members on the books was 65 & the funds had amounted to £4-10.  As soon as the sum of £5 was reached, the money would be put in a bank & and a Treasurer appointed.  Some of the members had lapsed in their payments & were to be asked to continue their membership, the sums they had already paid being duly credited to them.  Bills had been printed giving information as to the union, these would be circulated & meetings held with a view to making the position of the union more sure.

A statement was next made as to difficulties which had arisen in regard to the introduction of machinery in the cigar making trade.  The union  refused to recognise machinery & as a number of the members (25) had accepted work at a factory(Co-operative) where these unions were in use, these workers were compelled to drop out of the union for this, (& no other) reason.  Mr. Cooper the General Secretary of the Union London, had been written to in reference to the matter, & it was resolved to await his reply, before deciding on any course of action.

The question of Miss Ashwell’s  resignation was considered.

Miss Wilson moved & Miss Spencer seconded that: That the Council after receiving Miss Ashwell’s statement, feels itself reluctantly compelled to accept her resignation with the greatest regret, & desires again to express its appreciation of the valuable work she has given to the movement, & is glad to learn that she will give all the voluntary help in her power in the future.  Carried.

It was proposed by Miss Wilson & seconded by Mr. Harker that the position of the Secretaries should be equal.  Carried.

It was further resolved that the sub-Committee should settle the salary & what means should be taken to secure applications.

Miss Ashwell then reported that Mrs. Schwann & herself had had an interview with Mrs. Hogg of the Women’s Industrial Council on February 21st.  This Council had received a grant of money from the London School of Economics on condition that they would make a thorough & exhaustive enquiry into the wages & conditions of one woman’s trade in London & and the provinces.  They had chosen as their subject women’s work in the paper, printing, bookbinding & stationery trades & had drawn up a number of questions bearing  upon such points as training, wages, organisation, married & unmarried workers, separate factory legislation, women & machinery etc.  The Women’s Industrial Council were anxious to secure the help of the Manchester Salford & District Women’s Trades Union Council to facilitate the progress of the enquiry.

After some discussion in the course of which it was pointed out that the information would be of considerable use, it was proposed by Miss Gaskell & seconded by Mrs. Sidgwick that it  be a recommendation to the Investigation Committee to cooperate with the Industrial  Council in reference to the enquiry.  Carried

On the motion of Miss Wilson seconded by Miss Spencer, Miss Ethel Faraday was elected a member of the Council.  Carried.

Miss Ashwell reported that since January 1st  1900 the sum of £42-6-2 had been paid into the bank in subscriptions & donations & eight new subscriptions small in amount had been received.  The bank balance was £10-1-2.

Miss Ashton pressed the need of further effort to improve their financial position of the council. 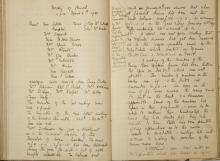 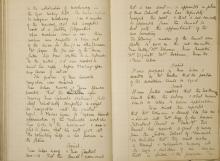 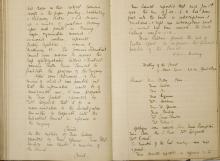