It was reported that Miss MacArthur would not be in Manchester May or June but that she would be glad to meet the Council later on.

The Chairman proposed that in view of special urgency the question of the Council’s taking active steps about the closing of the Women’s Labour Bureau should now be discussed.  Carried.  Miss Bulley was strongly of opinion that the Bureau was a useful institution & that an effort should be made to retain it.  After some discussion Mr. Marr proposed that a letter should be sent at once to the Labour Registry Committee urging on them to continue the useful work of the Bureau & the advisability of certain changes in its working.  It was suggested that the chairman should also be written to.  These letters were left to Miss Bulley & the Secretaries.

The Council expressed their regret for Mr. Arnolds death and their sympathy with Mrs. Arnold.

A report was given as to the state of the Winders Fund. £133.  3.  6  had been collected.  The Winders had had £30.  The difficulty was now practically over.  Of the Balance £133.3.6 Mr. Marr proposed that £20 should be given to the Winders.  Miss Cox seconded.  Carried.  With regard to the rest of the money Miss Cox proposed Miss Ashton seconded “that the principal donors be consulted & that subject to their approval the money should be put in an Emergency Fund.” Carried.

Progress among the sewing machinists was reported.  A meeting had been held at the Art Museum.  About 30 members were enrolled.  The union had asked for a loan of 30/-to cover initial expenses books, printing etc.  This request the Council decided on granting moved by Miss Bulley seconded by Miss Crompton.

It was reported that the Weavers had finally decided to ask Miss Keenan their Treasurer to accept the post of Secretary at a salary of 25/-a  week.  Miss Keenan had decided to undertake the work on these terms.

It was reported that the social meeting May 11th at Ancoats Art Museum had been well attended.  The bill of £5.  2.  10 for food was passed.  About 424 were present.  A note of thanks was passed to Miss Crompton & Mr. Marr for their kind help. 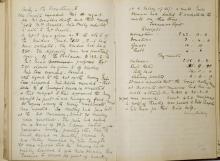