A letter was read from Sir.  W. Mather President of the Council resigning his position, on the grounds that he was retiring from all work of the kind.  Mr. Johnston proposed, Miss Ashton seconded “that Sir.  W.  Mather’s resignation be accepted with deep regret.  Carried.” Miss Gore Booth was instructed to write to Sir.  W.  Mathers to this effect.

It was reported that of the subscribers to the Winders Fund Mrs. Worthington,  Miss S???,  Mrs. Crossley, Mrs. Mark Ashton, Mrs Haworth had written to say that they were willing to allow their subscriptions to go to the Emergency Fund.  Miss Ashton had allowed her £5 to be used to pay the bill for the social.  £63. 2.0.  was to be transferred to the Emergency Fund.

It was reported that a difficulty had arisen in Mr. Sugden’s shirt factory at Cleckheaton.  At the request of Mr. Harker Miss Gore Booth had gone with Miss Smith, the women shirtmakers Treasurer,  to Cleckheaton,  had visited some of the workers and attended a meeting of the Shirtmakers' Union & the Cleckheaton Trade Council & had failed to get an interview with Mr. Sugden.  The Shirtmakers' Union had decided to support the women who were thrown out of work because of the loyalty to the union.  On the formation of the union the employer had sent away the President Secretary & Committee, & had refused all negotiations.  It was proposed to arrange a deputation to Mr. Sugden & in case of the Secretaries help being required, Miss Cox offered to help in office.

The sewing-machinists had had two meetings.  Their membership was still small but steady.

The Factory Inspector had been written to about stoppages, at Barbery. He had visited the firm, but thought that unless a very clear case of injustice could be proved nothing could be done, as the employer was very careful to keep within the letter of the law.

The position of affairs in the Winders' Union was discussed, also the advisability of sending a deputation to Sir W. Holland.  The matter was adjourned for the present.

Miss Bulley reported that she and Miss Gore-Booth has written a letter to the  Labour Registries Committee, remonstrating against the closing of the Women’s Labour Bureau as the Council had decided.  Miss Gore Booth had seen Mr. Hart who was in sympathy with the Council's object, & was willing to use his influence for the re- establishment of the Bureau.

A letter  was read from Mr. Cooke re conditions of work & payment of waitresses in  Messrs. Roberts cafe.  The pay was reported to be very low,  the hours long, & the conditions not healthy.  Mr. Cooke urged the Council to take the matter up.  After some discussion Miss Gore Booth was instructed to get into communication with a worker mentioned by Mr. Cooke.

Miss Bulley gave notice that she wished to propose that an enquiry be made into the numbers of the members in the little Unions connected with the Council.  She thought it was remarkable that  the membership should not be larger & thought that something might be done to strengthen them.  The sub-Committee were asked to inquire into the matter. 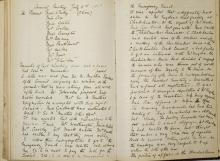 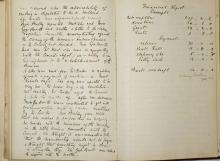