The report was considered in detail & passed, and ordered to be printed and circulated.

The following members were proposed for the Executive  Committee by Miss Higginson and seconded by Mrs Sidgwick.

Miss Ashton moved that a vote of thanks be sent to Messrs. Guthrie Chartered Accountants for again auditing the books of the Council.  This was seconded by Miss Crompton & carried.

An invitation had been received from the North of England Society for promoting the election of women to serve on a local governing bodies,  to send two representatives of the Council to take part in a conference to be held on Friday January 19th in the Lord Mayor’s Parlour.  The subject of the conference was the support of Mr. Courtney’s amendment relating to the exclusion of women from London Vestries. Miss Cox proposed & Mr. Harker seconded that the council accept the invitation.  Carried.

Miss Bulley & Miss Spencer were elected to represent the Council.

Miss Bulley reported to the council that Mrs. Schwann had offered to resign the post of Hon.  Secretary & said that she had written urging her not to do so.  The Council expressed at hope that Mrs. Schwann would continue in office & that they would not be deprived of her valuable service. 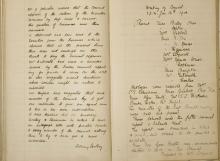 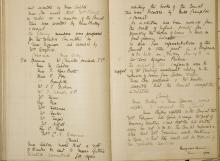