Miss Bulley reported that the Women's Unions were trying to get a representative on to the Technical Education Committee.  They had chosen Miss Gore Booth for their candidate.  She had been supported by the Men's Trade Council & the Central Council of the Independent Labour Party & Miss Bulley had been asked as Chairman of the Council to endorse  her candidature.  She had written a letter to this effect to the Trades Council.  The matter was discussed and the Council expressed approval of the action of the Women's Unions.  The resignation of the  Rev.  Charles Peach and of Mrs. Roberts were accepted with regret.  The sub-Committee Minutes were read & passed.  It was reported that the Secretaries  had been approached by Mr. Mallalieu, General Secretary of the Felt Hatters Union,  with a view to mediating in a strike at Bury.  The Employers' Federation at a meeting had agreed to the proposed effort at conciliation, but the matter had fallen through owing to the firm at the last moment withdrawing their consent.

The Shirtmakers at Rotherham had been engaged in a dispute & the Rotherham Trade Council had called in the Councils help.  The strike had been going four weeks & there seemed no chance of a settlement.  Representatives of the Manchester Shirtmakers Union had gone with Mrs. Dickenson to Rotherham on January 1st.  A meeting had been held & a deputation had gone to the manager.  He made certain proposals which the women could not accept.  The firm is a Manchester one, and representatives from Rotherham decided to come over here & interview the head  of the firm.  They had decided to form a branch of the Shirtmakers' union here.

A meeting had been held at Gravel  Lane Schools for Langworthys weavers, & over thirty had begun to pay in to the union.  The Annual Report was read & passed.

Arrangements for the Annual Meeting were discussed.  It was decided to ask Mrs. Byles of  Bradford to speak and Mr. G.  D.  Kelley.  At Mrs. Schwann’s suggestion Miss Ashton had wished to propose that Miss Cox be made Hon.  Secretary of the Council.  Miss Cox was unwilling to stand saying that she understood that the sub-Committee had been formed to take the place of an Hon. Secretary.  She further moved that the Council do not have an Hon. Sec. for the present & and that the  title should be omitted in the Report.  Mrs .Ashwell Cooke seconded the motion, which was carried.

nb In the original minutes these minutes include a clipping pasted in of the "Receipts and Payment Account for December 1902." 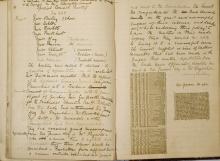