It was reported that Mrs. Sidgwick, Miss C. Herford & Mr. James Johnston had accepted the invitation to become members of the Council.

Miss Bertha Mason & Miss Cunliffe Owen, although sympathising with the Council’s aims, had declined owing to lack of time to attend the meetings.

The annual report & balance sheet were next read and considered in detail.

Mr. Herford moved and Mr. Dickson seconded that the report and balance sheet be adopted printed and circulated.

Mr. Hamilton then moved and Mrs. Sidgwick seconded (Mrs. Lyttleton having vacated the chair) that the Council’s officers for the ensuing year should be:-

Miss Ashwell then reported that the annual public meetings would be held on March 2nd.

The Lord Mayor had promised Mrs. Schwann to lend his parlour for the afternoon meeting at 3.00 PM, for subscribers & friends & the Lady Mayoress had promised to preside. Mr. Mather regretted that owing to his health he would probably not be able to be present. Mr. Scott had written regretting that he was too busy to attend. Mr. Hatch was sorry that he would be absent on the continent on March 2nd.

Mrs. Sidney Webb had declined the Council’s invitation to speak at the meeting, owing to pressure of literary work.

The evening meeting for working women would be held at 8pm in the Young Men’s Christian Association Hall, Peter Street, City.

Miss Tuckwell & Mrs. Marland Brodie had promised to speak. Miss Reddish of the Women’s Cooperative Guild regretted that she was unable to accept the Council’s invitation.

It was hoped that Mr. Schwann would take the chair.

Attention was drawn to the great need of an increased subscriptions list.

Mrs. Dickenson then gave a report of work done by the organising secretaries. In regard to the union of women engaged in the Printing Trades; Mr. Bradshaw of the firm of Bradshaw & Blacklock Queen Street had refused permission to hold a dinner hour meeting in the workroom saying that the majority of the girls employed went home to dinner. Some of the girls had however attended a meeting held in the offices of the Council on January 12th when Mrs. Schwann & she herself spoke to them. Messrs. Bradshaw & Blacklock had a well managed Sick Club to which many of the girls belonged. They therefore hesitated to undertake a further subscription of 2d per week to a trade union. As the result of that meeting however a certain number had joined the union, & more were giving in their names to do so.

The union had held a very successful social evening on January 23rd (80 present 60 women & 20 men from the Bookbinders Society.) The affair had covered its own expenses, & left a balance of 10s. The membership of the union now stood at 133.

The 66 girls from the works of the Linotype Co.Ltd had joined the Federation of Women Workers. They had appointed their own collectors & committee, & at the annual meeting of the Federation would be asked to form themselves into a branch & appoint a secretary. 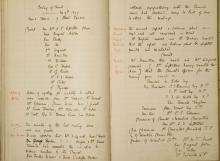 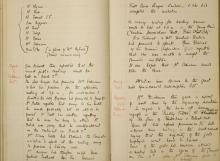 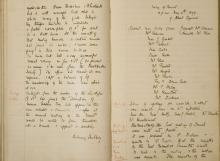