Memorandum The Minutes of the previous Meeting, February 5th were read and confirmed.

Memorandum Messrs. Forrest and Horsman were appointed to attend the Meeting to be held in Liverpool on the 15th instant for the formation of a Women's Trades Council. Mrs. Schwann stated she would be present by invitation.

Memorandum A draft letter requesting applications was submitted by Mrs. Schwann with respect to the appointment of an Organising Secretary. It was agreed that the same be submitted to the next Council Meeting with the recommendation of this Committee as to salary, etc. as agreed upon at the last meeting.

Memorandum A Sub Committee reported with respect to an office when it was agreed to recommend to the Council that one in Albert Square be taken yearly at a rental of £20.00, Mr. Forrest agreeing to see Mr. Ledward to have the refusal of it kept open until the meeting of Council.

Memorandum A general discussion as to the form the Constitution of the Council should take ensued, after which it was agreed that the title of the Association should be the Manchester, Salford, and District Women's Trades Union Council.

Resolved That the following recommendations be made to the Council:-

That the objects of the Council shall be-
1) To promote new and encourage existing organisations amongst women workers.
2) To collect and publish information as to the conditions under which women work with a view to influencing public opinion and promoting legislation for the improvement of their conditions of labour.
3) To endeavour by all legitimate means to improve such conditions by obtaining for women workers fair and uniform wages, shorter hours, and sanitary workrooms. That the Council shall elect annually 12 of their number together with the following office-bearers of the Council, viz:-

To form an Executive Committee; in addition thereto, that all Women's Trades' Unions represented on the Council shall be entitled to elect one member to sit on the Executive committee - seven to form a quorum.

That the Council appoint the Hon. Mrs. Lyttleton as Chairman of the Executive Committee.

That the following form the Executive for the first year:-

That the Executive, from their own number appoint the following Standing Committees:-
A Statistics Committee
An Organising Committee and a Finance Committee

That they have power to appoint Special Committees from time to time (as may be deemed prudent) to deal with special features, with power to call in the assistance of any Member of Council, specially suited to deal with such questions.

That the Executive meet on the first Tuesday in each month or oftener as required.

Resolved That this committee meets on Thursday, the 14th instant, at 3.30 pm and that the Hon. Secretary be requested to call a Council meeting for 4 o'clock on the afternoon of that date.

Resolved That Dr. Armstrong be recommended for election on the Council.

Resolved That this Committee recommend that the Rules and Constitution of the Council should be few and simple, as above, leaving additions to be made as experience warrants. 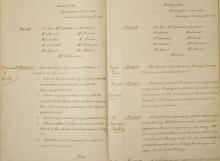