Memorandum The Minutes of the previous Meetings of the Committee, February 5th and 7th were read and confirmed.

Memorandum Mr. Forrest reported that Mrs. Arnold and he had seen the room (No.3) at 9 Albert Square approved of the recommendation to secure the room at a rental of £20 per annum.

Memorandum The draft constitution of the Council was discussed clause by clause and the terms agreed to.

Resolved That on the recommendation of the Organisation Committee Mr. Armstrong, Mr H. Preston, and the following members of the Committee of the Federation of Women Workers be added to the Council:-
Miss Fallows, Mrs. Millington, Miss Matthews, Mrs. Walton, Miss Ross, Miss Stubbs and Miss Welsh

Resolved that the following recommendations of the Organising Committee be adopted:-

Resolved That a Report of the proceedings of the Council, this day, be communicated to the Press. 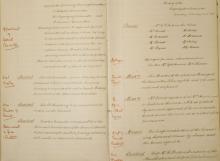 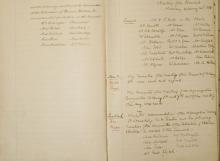 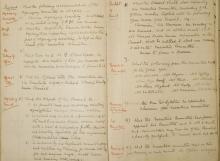 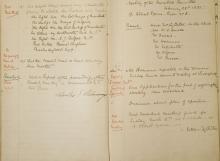